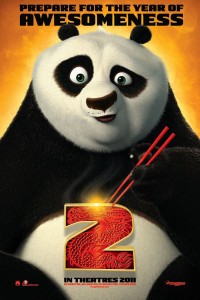 I have a bit of a confession to make, a few years ago when the original Kung Fu Panda came out in theaters, I ventured to the theater by myself and watched the film in awe. I was ecstatic to see a CG animated film, from a company that wasn’t Pixar, that was filled with heart, humor, and stunning visuals. The film brought out my inner child (and a bit of my inner Kung Fu nerd), and I recommended the film to people of all ages.

Despite loving the first film, I went into the second with a bit of hesitation. I wondered how they were going to handle the transformation of Po, the bumbling panda, who in the previous film had realized his true place as the “Dragon Warrior”. Much of the humor was derived from Po’s lack of discipline and his healthy dose of admiration for the Kung Fu masters around him, the “Furious Five”. Thankfully for us, the writers of Kung Fu Panda 2 made Po an equal with his fellow students without letting him lose his charm. Sure, this time around he handles himself a bit better, but he still has a lot to learn.

The focus of the sequel is “inner peace”. Po must travel across ancient China, and across his own psyche to find his inner peace, and defeat the evil Lord Shen (Gary Oldman). Lord Shen, an evil peacock who seeks the destruction of Kung Fu through the use of fire based weapons, had been told of a prophecy in which a black and white warrior would defeat him if he continues his evil path. Despite the warning, Shen continues to commit atrocities, and like all evil figures creates his worst enemy in the figure of the kind Kung Fu Panda, Po.

The second installment grows the mythology of the series, and dives into slightly darker paths that weren’t ventured down in the first film. Most of the really dark stuff happens after cuts, and we are left only to guess what happened in the aftermath. Although, just when you think the film brilliantly skirts issues about death, we are treated to vibrant traditionally animated sequences that are trapped deep within Po’s psyche dealing with how he came to be adopted.  It is the willingness to touch upon these issues that makes Dreamworks Animation much more of a rival of a company like Pixar, than a studio like Blue Sky Animation.

I’m normally not a big fan of 3D, but the animators brilliant color palette stays bright even with the dim 3D glasses, and adds much depth to the CG animation.  Although, the traditionally animated 2D sections come across best with the 3D, with the forefront of these scenes brilliantly sticking out far beyond the slightly out of focus background. Pair this brilliant animation design with the brilliant Kung Fu choreography and you have a children’s film that is a beauty to watch.  The speed in which the action moves is breathtaking.

The star-studded vocal cast, once again, does a brilliant job of lending credibility to their characters. Jack Black’s over the top vocal style translates well to a film like Kung Fu Panda 2.  The addition of the always brilliant Gary Oldman as a villain was a stroke of genius, and one of the many things the film got right.

Kung Fu Panda might lack a bit of the panache that the first film had, but it contains enough laughter, action, and visceral excitement to make it more than worth the price of admission. Beware there will be a few scenes that go over the heads of the younger children, but most of the film is well suited to children of all ages.