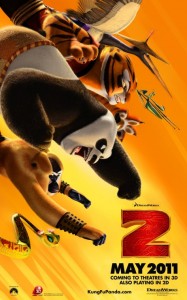 Kung Fu Panda 2 is a heartfelt and action packed sequel that moves us deeper into the series’ mythology, but seems to double down on stupid non-character based humor that pulls you out of the picture every time.

The film picks up shortly after the first with Po and The Furious Five protecting the lands around their temple, but we also learn a bit about Po’s background.  We are treated to a brief history lesson of China’s former Peacock Emperors and their son Lord Shen.  Shen was a master of fireworks and when the Royal Soothsayer sees Shen’s future demise at the hands of a black and white warrior, the country’s pandas are placed in grave danger.  Shen is ultimately banished and his eventual return will call Po and The Five to action.

The main through line of the film for Po is him coming to terms with his past and adopted daddy issues; with Shen falling right in line with Po’s past.  The moments between Po and his dad, Mr. Ping, are full of heart and very emotional, this applies to both the flashbacks and the film’s present timeline.  The mystery behind Po’s biological parents is intriguing, if a bit thin, but that story is going to be further explored in the next film. As it is, Po’s flashbacks do a great job of giving us enough to wet our appetite for Po catching up to his past, it makes Shen a really evil character, and helps build our love for Po and where he has come from.

Matching the heartfelt scenes are the action set pieces in the film.  The best fight is the first as Po and The Five fight off bandits together and the choreography is superb; it doesn’t quite match Tai Lung’s escape in the first film but still a hell of a scene.  Nearly matching the opening is the finale and an incredible escape from a tower, all utilizing teamwork among the group, which we better continue to see more of as the series goes on.  The movie also gives us too little of a taste of the Masters Croc and Oxen as they enter the battle, but maybe this won’t be the last of them; more JCVD please.  Those hoping for more great Kung Fu action will not be disappointed as most of the moments are on par with the first film’s great set pieces.

The humor in the film also works really well when character based, but falls flat on its face when it panders to stupid kid humor. I had a similar issue with How to Train Your Dragon last year.  The stuff that didn’t revolve around Hiccup and Toothless was more or less pointless and the other kids in the movie did nothing but fail to provide comic relief and serve as extra players for the final battle.  I have grown beyond these issues and pretty much love HTTYD and thankfully Kung Fu Panda 2 has no worthless characters in sight.  The biggest issues are how they constantly undermine genuinely good characters like Shen with awful attempts at humor around the character; diminishing a conflicted and imposing villain to a lame joke at times.  Other dumb instances are sprinkled about as well, but the moments surrounding Shen are the most egregious offenses. Upon further screenings, I am sure my quibbles with the dumb humor will melt away with Panda 2, and hopefully I can embrace the film’s heart like I want to.  Plus, there are still plenty of good laughs in the film from almost every character for us to enjoy over the misfires.

My complaints are mostly due to my lack of patience with DreamWorks and their humor formula that they won’t seem to let go of.  They don’t need to insert cheap humor that barely appeals to the kids it is aimed at to bring them in, they are going to show up regardless and love the film.  DreamWorks should instead keep their humor character based and aim high; as they can do humor right when they want to. Let’s just hope DreamWorks trusts it’s talents in the sequels and doesn’t aim for the lowest common denominator again.

The voice work is stellar again, as is the series’ debut in 3D, and it all supports some animation that is quite impressive. The scale and scope of the film has been greatly increased, with the sheer number of combatants on screen being jaw dropping at times.  The fighting is fluid and easy to follow with the creative team working overtime to create some innovative set pieces along the way.  Po’s journey of self discovery is some great character work as well and we even get to know some more about Tigress’ past.  Unfortunately the rest of The Five fall a bit to the wayside, but there is still plenty of awesome fisticuffs from them along with some good one-liners; especially from Seth Rogen’s Mantis.  Director Jennifer Yuh also sprinkles in a number of beautiful 2D animated sequences, like we saw in the first film’s opening sequence and short film, and they couldn’t look better.

My biggest problem with the film, outside the dumb humor, is that the third film they set up here is the one I wanted now.  The film, as it stands, is still a solid building block to the Kung Fu Panda lore and one I enjoyed quite a lot.  We get some added depth to Po and Tigress and Yuh delivers more solid action, the film is a worthy sequel.

In the end, Kung Fu Panda 2 has one minor flaw that hit me harder than it probably should.  The humor can be, and often is, great, but those few dumb moments really got to me. Issue aside, the characters are fun, the pacing fast, with a plentiful amount of solid action.  Fans of the first film will have plenty to enjoy here and will leave you wanting more from Po and friends on future adventures.  I hope the next film runs with the potential set up at the end; a Seven Samurai homage. (I know it’s not Kung Fu but it would be great)