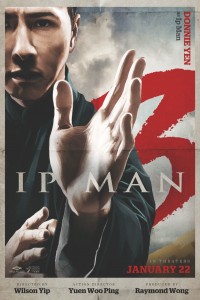 It’s been five years since Hong Kong’s action superstar Donnie Yen and director Wilson Yip brought us the first installment of the Ip Man franchise, a story based on the creator of the Wing Chun style of martial arts and made famous by the legendary Bruce Lee (one of Ip Man’s students in real life).  The newest installment has some stand outs:  the addition of Zhang Jin (who stared in another Ip Man biopic called The Grandmaster) and the rather strange addition of Mike Tyson (yes, that Mike Tyson). This was probably the weakest entry into the series, but it was still a solid flick.

Zhang Jin plays a character who trained with Ip when they were growing up and whose son is now in school with Ip’s son.  Jin’s character believes he can beat Ip and become the Wing Chung Grand Master.  The movie does a great job of making you care about this character.  He’s not someone who’s evil or bad just for the sake of the story.  He’s an honorable man who loves his son and even shows Ip respect. As the movie progresses, Jin’s character becomes more and more frustrated that the media will only talk about Ip and his accomplishments. Tin-Chi (Jin) finally has his one on one showdown with Ip.  It’s an amazingly well crafted fight.  One you need to see.

On to Mike Tyson. Tyson plays an American businessman set on buying up property, though we aren’t told why.  One can only assume that “Iron” Mike was cast as a stunt to get people into the theaters. His performance is what you would expect but nothing funny like in The Hangover. Tyson plays it as straight as possible. He’s able to deliver a really great fight with Yen that is better than it has any right to be.  It’s a little reminiscent of the Kareem Abdul-Jabbar/Bruce Lee fight from Game of Death, but Tyson can move better than Jabbar.

Another nice moment in the film comes when the filmmakers pay homage to the relationship between Ip Man and Bruce Lee. “The Student” (as he’s referred to) asks to study with Ip. Just by the way the actor (Danny Chan) carries himself, it’s pretty obvious that he is supposed to be Bruce Lee. Ip challenges “The Student” by flicking cigarettes at him. With a flurry of kicks, the student knocks each cigarette out of the air. As cool as the scene was, don’t get your hopes up of seeing “the student” again.  Ip tells him that the man can be faster and shows him the door.   The scene between Ip and “the student” is very much in the style of The Matrix (which makes sense because it’s the same fight choreographer).  It was very fluid and smooth.

One of the things that has made this franchise such a success (in addition to Donnie Yen’s subtle take as Ip Man) is the fights. The first two entries into the Ip Man series had fights choreographed by Sammo Hung and Tony Leung Siu-Hung. Ip Man 3 featured fight choreography by Yuen Woo Ping. You have seen Ping’s work before. Ping was the mastermind behind The Matrix, Kill Bill: Vol. 1, and Crouching Tiger, Hidden Dragon. Ping’s style relies heavily on very intricate wire work. Now while his work can be beautiful and very cinematic, it’s a big switch from the previous two Ip movies which had almost no wire work. In this film, he is able to capture the feel of the original two while making it his own. Whether Ip is taking on a shipyard full of gang members or he’s fighting a single opponent in an elevator, there is minimal wire work (enough to capture his style but less than his usual).

The only nitpick that really came to mind was about the timeline.  The film takes place in 1959. To the best of this reviewers knowledge, Bruce Lee was already in the United States by then. It’s no secret that Bruce Lee trained with Ip Man in real life. Given the legendary status that Bruce Lee holds and all of the information we have about his career, it seems like a pretty sloppy oversight.

Overall, if this is the end of the Ip Man franchise, then this is a really solid way to go out.  If you haven’t seen any of Donnie Yen’s other flicks, I would recommend Flashpoint or Kung Fu Killer. Yen will also be one of the stars of this year’s Star Wars entry Rouge One: A Star Wars Story.