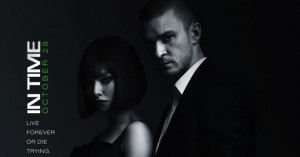 Imagine you’re a Hollywood executive. A well known sci-fi screenwriter pitches you an idea. It’s about communism…how wealth should be distributed equally among all of society. Of course you say ‘no’. So he revises. Now he says it’s like Robin Hood in an alternate universe, where time literally is money. The rich can live for eons, while the poor toil away to live a few extra hours. And to make it even better…no one ages past 25, so everybody is hot. Suddenly, that movie about communism is a lot more palatable…and in these dire times of ‘Occupy the McDonald’s on the corner of 4th and Main’…also very mainstream.

I’m of course being dramatic, this is not a piece of a communist propaganda…at least not anymore than Robin Hood. In Time is the classic ‘steal from the rich to give to the poor’ story. With elements of the Patty Hearst kidnapping and A Life Less Ordinary, In Time tells the story of Will Salas, (Justin Timberlake) who after being gifted over 100 years, finds himself the captor of an heiress (Amanda Seyfried). While evading capture by a ‘timekeeper’ (Cillian Murphy), they stumble on a conspiracy designed to keep the rich, rich and the poor, poor. Sound familiar?

The film’s strengths lie in it’s ability to personify the inequality of wealth with time. We’re introduced to Will Salas in the ghetto, where people literally live day to day. We’re taught that a week is a lot of “money” and a month is worth getting killed over. Translate that to the affluent neighborhood of New Greenwich and the disparity becomes painfully apparent. Just to get into the fancy casino costs a “voluntary donation” of one year.

In Time ultimately works as a fun, stylish action thriller. It has something to say about the problems of wealth inequality and conveys that message in a fairly concise and interesting way. Sure, it’s filled with plot holes and the entire premise is pretty illogical…but then again, so is the Transformers franchise and that seems to be pretty popular.

So if you’re in the mood for something lighter than the typical Oscar-fare of the fall film season (I’m looking at you The Twilight Saga: Breaking Dawn – Part 1), check out In Time. Just try not to pay attention to Alex Pettyfer’s miserable attempt to play a mob boss.

*Scoring has been amended for this movie…puns intended. Also, it should be noted that I, along with my wife and friends of ours, Shawn and Erica all actually paid for our tickets. So when I say we were all satisfied with the price we paid…we mean it.

Not Worth Your Time

Worth Somebody Else’s Time