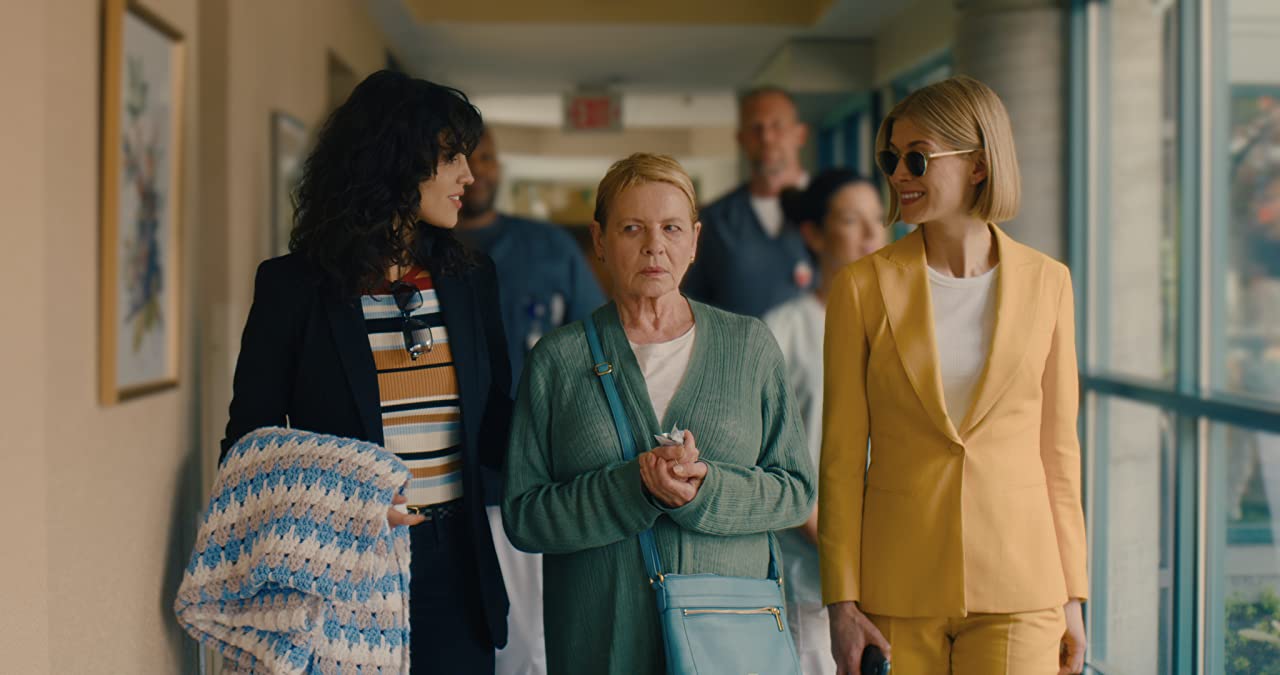 I Care a Lot is a film that could easily be titled, “I Care a Lot… About Winning.” Society has become obsessed with the notion that, if you’re not winning – you’re losing. We’ve seen this play out in countless films over the years, like Wall Street, Scarface – pretty much any film where the central character climbs their way to the top, and doesn’t know where to stop. They will do anything to win, but at what cost?

Written and directed by J Blakeson, the latest film to hit Netflix stars Rosamund Pike as Marla Grayson – a woman determined to be rich and successful by, you guessed it, any means necessary. A wolf in sheep’s clothing, she is a con artist disguised as a caretaker – controlling the lives of wards of the state who have been deemed unable to care for themselves. The catch is, she has targeted each of them before calculating how to get them under her control.

With the help of her partner Fran (Eiza González), they choose the wrong little old lady to take advantage of. Jennifer Peterson (Dianne Wiest) is what they refer to as a “cherry” – someone with no attachments, no spouse, no children – so they can control every aspect of her life. Without giving away too much of the plot, they were unfortunately wrong – and has a very powerful family member in Roman – played by the talented Peter Dinklage. Marla keeps digging herself deeper and deeper, refusing to lose.

Pike is fierce in the role, channeling and expanding upon her portrayal of Amy in Gone Girl. Perfectly casted, the actor has a talent for playing smart, strong-willed characters – and she is truly a force to be reckoned with in the film. She will stop at nothing to conquer whatever is in her sights, convincing everyone around her that she is looking out for someone other than herself. The greatest con may be that the character has even convinced herself that she cares about others, and we see what depths that takes her to.

The entire supporting cast in the film is terrific. González plays the perfect point-man, if you will, doing the research and planning the capture of these innocent elderly targets. She and Pike have a great chemistry with one another. Chris Messina plays a smooth-talking lawyer, charismatic to no end, who tries to convince Marla that she’s gotten in too deep. And Isiah Whitlock Jr. is great as always, here as the judge who presides over her caretaker cases.

Dianne Wiest is outstanding at the center of this legally-sanctioned kidnapping, saying everything without saying much at all. The actor is able to speak through her body language, telling the audience that there is a lot going on in her head – and when she finally lets it out it’s a real treat.

I’ve been a fan of Peter Dinklage since I first saw him in Death at a Funeral (he was great in both versions), and have loved watching his rise to fame ever since. There is nothing the actor can’t do, and he was easily one of the best parts of every season of Game of Thrones. Here he plays not such a nice guy as Tyrion Lannister, and I was there for every minute of it. Check intimidating crime lord off the list – he nails it.

I Care a Lot presents the audience with a compelling character study on multiple levels, giving them no real “good guy” to root for. Rather, you hope that the characters will learn something, and maybe they have a chance for redemption. The story mirrors a lot of what is wrong with the world today – people making bad decisions, doubling down, refusing to admit defeat. Why are so many people willing to sacrifice everything for the chance to say that they won? Caring is generally a good thing, but not when you only care about yourself.