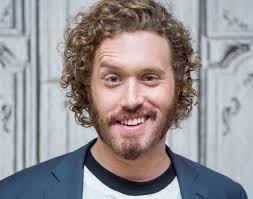 T.J. Miller brought his act back to Helium Comedy Club St. Louis this weekend for a three night stand and once again, he did not disappoint.

Helium Comedy Club appeared to be running at about 1/3 capacity and social distancing standards were enforced and spectators willingly adhered.

With a start time of 8:00 p.m., the show kicked off on time with local guy, Max Pryce warming up the crowd.  Great dude!  Pryce played the crowd with some super substantial bits; some of which garnered a chuckle from the crowd here and there, while I sounded like I was deflating with my wheeze laugh.  Nailing bits about jail, drug addiction, and being a proud dad…THIS was what made his dark comedy shine, especially since it was performed so conventionally.   If you ever have the chance to catch his act around these parts, grab it.

T.J. was welcomed to the stage by thunderous applause.  Had one not known any better, you would’ve thought the room was packed to full capacity.

In true Miller fashion, the seasoned comic and actor quickly garnered the full attention of the audience when he wasted no time making connections with fans by way of observation; something that which Miller is known.

Noticeably, he didn’t bring much in the way of pandemic bits, as he promised in our recent interview.  He told us that people come to a comedy show to escape the rigors of life and immerse themselves in life’s best medicine: laughter.  He asserted that people need this now  more than ever and he completely lived up to that promise.

The show was seamless and the majority was seemingly improvised; another quality of a great comic.  No one in the audience was off limits and everyone played very well in the sandbox.

In this bizzaro world we’re living in, humans are in dire need of social interaction and laughter.  Miller’s show is a sure thing and worth every penny, as always.

You still have time to catch T.J. while he’s in town.  That is, if you hurry.  His evening shows are sold out, but tickets remain for the 4:30 show.  You can get those here.