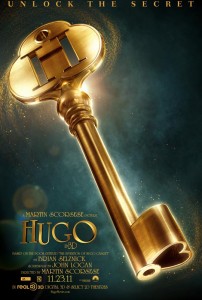 Martin Scorsese isn’t the first person you would think of to adapt a book like “The Invention of Hugo Cabret”. For one, the book is a bit more fantastical than Scorsese’s most famous works like, Goodfellas and Taxi Driver, and the audience the book appeals to isn’t allowed to watch the majority of his films. However, Scorsese tackles the source material with love, and adds almost a bit too much maturity to be easily accessible to the audience the book caters to.

Hugo Cabret (Asa Butterfield) is many things, an orphan, thief, and most importantly to some, he is the person who keeps the clocks running at the busiest train station in Paris. Hugo lives his life day to day, thieving what he can to get by, and doing so stealthily to avoid contact with the station inspector (Sacha Baron Cohen). Hugo’s main purpose in life is to continue to fix the automaton, a machine with clockwork that does extraordinary things, his father brought home from a museum shortly before he perished. Unfortunately for Hugo, he is caught stealing by the owner of the toy store within the station, George Méliès (Ben Kingsley), and is forced to work with him to win his belongings that the toy store owner has taken. Hugo strikes up a friendship with Méliès’ goddaughter, Isabelle (Chloe Grace Moretz), and the two try to uncover the mystery that is George Méliès.

Many will go in not knowing that some of Hugo is actually based in true history.  George Méliès was an actual film pioneer whose films were once thought lost, and lived out the majority of his remaining days running a toy shop within a Paris train station. The rest of the story isn’t based in fact, but the small amounts of film history are something that at once give credence to the story, and at the same time slows its pace. Many will not be able to appreciate the finer aspects about Méliès, and will instead want to continue the story of the charming boy living in the station. The back story does give insight as to why a director like Scorsese would choose to adapt a story like this. Scorsese is a student of cinema, and Hugo is very much his love letter to the early pioneers of cinema. The disappointing thread behind this thought is that parts of the film are only exciting to those with interest in early cinematic history.

This isn’t to say that Hugo can’t be exciting to watch, in fact quite the opposite, the first 10 to 15 minutes of the film are astounding. I felt myself holding my breath at the beauty of the film, and the incredible use of 3D. The pace quickly slows, and the next 45 minutes of the film crawl by so slowly it makes you wonder if any children will be able to sit through it. I kept myself enthralled by focusing on the visuals of the film which are among the best of the year. Leave it to a director like Scorsese to finally grasp the correct use of 3D. For too long the use of 3D has been confined only to gimmicky uses, but Scorsese uses it to enhance the storytelling. Everything in film can be said through an image, and the stark contrast, with the incredible depth of field, with images of gears and steam rising throughout a Paris backdrop make for a unique visual tale. Avatar has long been touted as the only worthwhile live action 3D film, but I’m not sure even Cameron used 3D technology half as well as Scorsese does in Hugo.

Much of the acting in the film is left to the three leads, Kingsley, Butterfield, and Moretz, all of which do a stellar job. Butterfield, who was recently signed on to star in the Ender’s Game adaptation, goes through a full range of emotions from wonderment to despair. Without Butterfield, the film could have fallen flat on its face, but Scorsese famous for his performances he draws from actors, once again brings out a great performance in the young actor. Moretz continues her meteoric rise and proves that she is no flash in the pan. Her performances over the past year gives hope that she doesn’t follow in the footsteps in so many American child actors, and continues to choose good roles (and hopefully some solid moral choices as well).  Kingsley, who actually resembles Méliès quite closely, is the anchor of the film, and gives the broadest performance of the film.

The secondary characters all do their job well, but Baron Cohen’s Station Inspector seems out of place with the rest of the film. The slapsticky elements feel forced in the rest of the fairly serious film. However, Scorsese evolves the character a bit throughout the film, and by the end the character is almost charming.  It is a character that will be loved by some, and despised by others. It looks as if the character merely serves the purpose of being a base villain for the younger audience attending the film, who might not get some of the more mature themes.

Go see Hugo if you are wanting to see breathtaking 3D, but it isn’t a film I’d advise taking the kids to, not because of anything inappropriate, just because I’m not sure they will enjoy the pace. I hope that I am slightly surprised by the response. In the end if Hugo had been just 30 to 45 minutes shorter, the film could have been one of the best of the year. Instead, it is a beautiful film with a plot that can border on tedious at times.