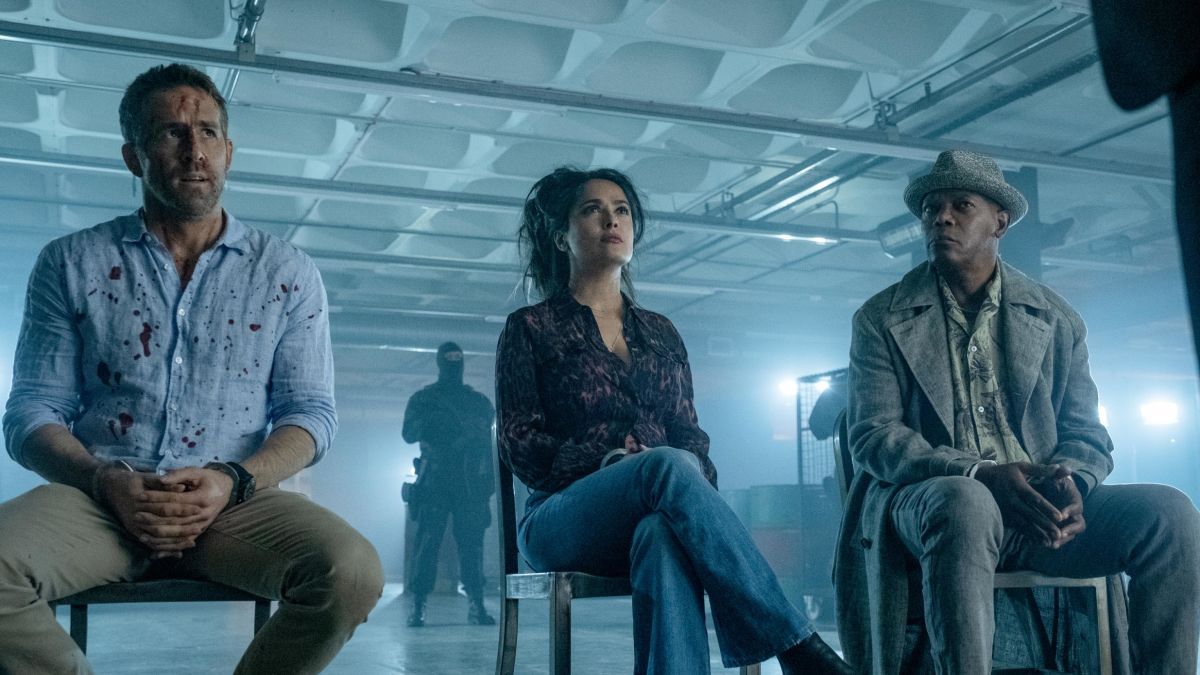 Listen, I get why they make a lot of sequels; it’$ not tough to deduce the rea$on. But i think we all can agree that some movies just don’t necessarily warrant a sequel. Either the plot was sufficient to end on a high note or the writers used up their best material in the first, so we didn’t really need to revisit that particular universe for another two hours. Titanic, for example. Twilight and 50 Shades of Grey also come to mind (although I’d argue the first ones probably didn’t merit being made, either).

So while I did enjoy The Hitman’s Bodyguard for the most part, I didn’t really feel like it needed to be revisited. I actually didn’t even know it was getting a sequel until a few weeks before release. On the other hand, I enjoy most Ryan Reynolds films, and come on. Samuel L. Jackson. So it was with reserved optimism I went into the theater for Hitman’s Wife’s Bodyguard.

Reynolds is nominally the main character, Michael Bryce, a bodyguard who hasn’t been able to stop his fall from grace. Ever since losing his AAA certification before the first film, he’s struggled to bounce back, to the point that he’s forced to take a mandatory sabbatical from working, preventing him from being able to use lethal force. His vacation is interrupted by Sonia Kincaid (Salma Hayek), Darius’s wife, who needs his help rescuing Darlus (Jackson) from a a mobster who’s taken him hostage.

From there, it’s revealed that there’s a larger plot at play, one that could bring down the European infrastructure, so naturally Bryce and the Kincaids embark in an effort to prevent it from happening. It’s a fairly forgettable story that takes a backseat to the interactions between Bryce, Sonia, and Darius. The banter between Darius and Bryce, two people whose professions put them at odds with each other, was the key to the first movie; without Ryan’s charisma and Jackson’s acerbic replies, the first movie goes absolutely nowhere. It’s back in full force, but it’s magnified exponentially with the further inclusion of Sonia, who steals the show every time she’s on screen. Not that there’s a ton of character depth, but she has the most layers, balancing her desire to be a mother with an aggressive display of force she brings down on her opponents (and Darius and Bryce at times). I mentioned earlier that Bryce is nominally the main character, but this film would have been a total disaster without Sonia.

On the other hand, beyond Sonia, there isn’t much to merit them returning to the well for a second time. Reynolds and Jackson do what they can with their roles, but it’s nothing new. Much of the humor and jokes are the same as the original, with Bryce’s careful planning and overwhelming concern for safety being at odds with Kincaid’s total disregard for caution or sensitivity. It’s still effective at times, but by the end of the film, you’re either going to be cracking up or tired of it, along with the endless ironic segues. There is a plot twist about ¾ of the way through, but the setup is incredibly predictable from the get-go.

Ultimately, it’s hard to really give Hitman’s Wife’s Bodyguard a ringing endorsement, nor can I really say I hated it. I enjoyed the first, so in theory I should have liked the second, as it’s more of the same. At the same time, it just felt like too much repetition with a few genuinely good laughs thrown in.

Bottom line, if you enjoyed the first and simply want more of the same humor, then you’ll likely enjoy Hitman’s Wife’s Bodyguard. If you want anything new, though, you’re likely to be disappointed.