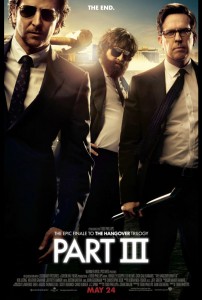 When The Hangover exploded onto the cinematic scene in 2009, it was the surprise hit of the year. It was without a doubt, one of the more original, and funny movies I had seen in a number of years. It made Zack Galifianakis a household name, along with Bradley Cooper.

Then, came the stinker, Hangover 2. To say it was a letdown, for me, would be an understatement. I honestly thought it was one of the worst movies of the year in 2011. I understand that Scott Armstrong and Todd Phillips were trying to emulate the structure of the first film very closely, when writing the second, but it didn’t work. While the sequel made money, it was largely met with disappointed audiences.

So, going into the third installment, and reportedly the final one of the franchise, I was skeptical. Would this be another stinker like the second? Or, would it be similar to the first, and make me laugh so hard, I missed parts of the film? It’s hard to give a clear answer on that, but I will say, it’s way better than the second, but not as good as the original.

Here are 6 bad comedy sequels in honor of The Hangover Part III.

As soon as the film opens, you know it’s going to be different from the first two. The third opens with Chow, played by Ken Jeong, escaping from prison, Shawshank Redemption style. I found that homage to one of my favorite films, quite laughable. The film then immediately skips to Galifianakis’ character Alan.  Alan is enjoying a drive down the highway after buying a giraffe. What happens next can only be described as something out of a Final Destination film. Let’s just say, it’s not a good day to be a giraffe, but how funny it is to see the events transpire. By the way, Galifianakis shows his comedic chops in this film. He steals the show from everyone. In my mind, if there is one reason to see the third film, it’s because of Galifianakis’ performance.

The rest of the Wolf Pack comes together following the death of Alan’s father, which is also a funny, yet sorrowful scene. The funeral, is one of the most memorable parts of the movie, as Galifianakis once again steals the show. One can only help but laugh at some of the off color things Alan says throughout the film.

The Wolf Pack is back together again, following an attempted intervention, which forces the guys to take Alan on a road trip to Arizona. Let’s just say, they don’t make it there.

After a run in with newcomer to the film, John Goodman, who plays a kingpin drug dealer, the pack is reduced to a trio, just like in the first two films. Goodman is very enjoyable to watch as a bad guy. While not in the film a whole lot, he does a fine job with his small parts. What happens after Doug is taken is pretty much, all out insanity.

While Galifianakis is the savior of the the third Hangover, there are some weak spots. I particularly didn’t care for Cooper’s character this time. In the first film, Cooper’s character, Phil, was a total smart ass, which played well with Galifianakis’ character. In this film, Cooper’s character is seen as much more warm and loving. Not that it’s a bad thing, but I thought his character was one of the reasons the original worked so well. And speaking of characters, Jeong’s character Chow is a big part of the third installment. Chow is still up to his scheming tricks, but this time, he’s more dangerous. I personally find his character to be a bit over the top and annoying in most scenes, but he can be pretty comical at times.

I can’t forget to mention Melissa McCarthy’s small role. She and Galifianakis are great together in one scene where she plays a pawn shop worker. I really enjoyed the small, but important role she plays in the film. She is able to show, almost a normal side of Alan. Remember, I said, almost!

Overall, I would have to say the franchise rebounded nicely with this conclusion. While it is not perfect, it shows heart, something the second Hangover lacked. I think it closes out the Hangover trilogy quite nicely. I can understand some moviegoers being on the fence on whether to shell out $10 for the conclusion of this money-making franchise, but ultimately, there are more reasons to see The Hangover Part III then to not see it. Remember to stick around during the credits for a somewhat disturbing, but ultimately funny clip, which shows that while Alan may have changed some of his maniacal ways, he still has issues.