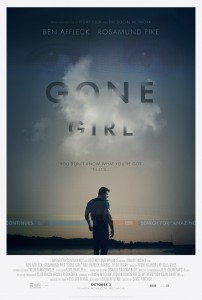 One of the most anticipated films of 2014 is finally here. Gone Girl, based on the 2012 novel by Gillian Flynn, stars Ben Affleck and Rosamund Pike as two out of work writers whose marriage has steadily declined over its five year lifespan. When the wife suddenly goes missing, all eyes turn to the husband. Directed by the immensely talented David Fincher, the film beautifully captures the mystery and intrigue of the book through a dark and eerie tone that he has perfected. Add a score by Trent Reznor to the mix, and what you get is a combination destined for glory.

Nick (Affleck) and Amy Dunne (Rosamund Pike) have fallen upon tough times since they first met. What started as a whirlwind romance has slowly disintegrated over the years. The once successful New York writers have both lost their jobs, most of their money, and more importantly – their love for one another. After moving back to Missouri to take care of Nick’s dying mother, the two of them continued to grow further apart. On the morning of their fifth wedding anniversary, Nick leaves to clear his head and visit his sister Margo (Carrie Coon) with whom he co-owns a small bar with – aptly named “The Bar.” When he returns home, Amy is gone – leaving behind what appears to be a crime scene. Nick calls the police and what follows is a back and forth chronicle of days since Amy went missing, and the years leading up to her disappearance.

Casting for the film couldn’t have been any more perfect. As someone who has read the book, the announcement of Affleck as Nick Dunne was a slam dunk. In the book Nick says,”Looking at my smarmy grin, my hooded eyes, I thought, I would hate this guy.” Affleck is talented actor, not to mention writer and director. And one of the qualities he has is the ability to come off as smug or arrogant. Think back to Dazed and Confused, or Mallrats – even many of his roles where he isn’t the bad buy. He just has that quality, which works in his favor as Nick. At the first press conference, when he is supposed to be a wreck, yet manages to give off the “insane love me! grin,” described in the book – it sealed the deal. Affleck does a great job of going back and forth between lovable and loath-able, and shows a wide range of emotions.

Rosamund Pike is fantastic as Amy. Although we don’t see as much of her as we do Nick, she narrates the story leading up to her disappearance and does a fantastic job. Although she is a fine actress, I had my reservations when I heard the casting for the character. But what we end up with is a phenomenal performance, and some killer scenes. Credit must also be given to Neil Patrick Harris, who is obviously better known for his comedic roles. NPH does a great job as coming off as a sleazeball in this one.

It’s amazing how the look and feel of a film can change the way we interpret the story. David Fincher has a unique style of filmmaking, and Gone Girl is no exception. No matter when or where the film takes place, he applies his trademark filter along with Reznor’s score and sets an uncomfortable and eerie tone. And the result is brilliant. I can think of no better director to take on this story, as Fincher applies his talents not only to the unsettling beats – but to a certain touch of irony and dark, chilling humor. Not the kind you laugh out loud at, but the kind that makes you think about just how twisted and messed up some people can be. He captures everything there is to love about Flynn’s novel, giving us one of the best novel adaptations I have seen in a while.

It’s understandable that readers who love the book may be afraid that the film will ruin it for them. Or at least that it won’t be what they had imagined. It’s an understandable fear, as so many adaptations miss the mark by a long shot. Yet in the case of Gone Girl, David Fincher brings the words to life in such a way that only the director can. And it works on all levels. The novel is told in a very unique fashion, to which Fincher is no stranger to (see Fight Club, 12 Monkeys), and allows him to excel in storytelling. The film also proves that the Fincher/Reznor combo is a winning one. If you love the book, chances are you will love the movie. And if you haven’t read it yet, chances are you will want to soon.

Gone Girl is an A.