“Holy crap, they made a Godzilla movie!” 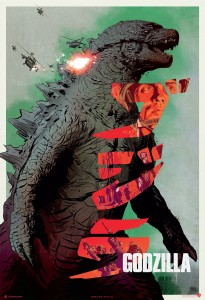 That brilliant and insightful cinematic commentary came from yours truly, roughly during the last third of director Gareth Edwards’ (Monsters) summer reboot of filmdom’s favorite green-skinned gargantuan, Godzilla. I couldn’t resist – as an avowed monster-lover dating all the way back to the days of “Creature Features” on our local UHF station, I’ve had a soft spot for the big guy and his gang (Mothra, Gamera, Rodan… hell, I even got my giggles off the animated show – well, save for Godzuki).

Aside from the bloated and embarrassing Americanized mishandling by Roland Emmerich in 1998, Godzilla, to me is as warm and comforting a figure as Santa or the Easter Bunny to the normals. And though this film has some strange tonal shifts, at risk of becoming slightly ajar, it’s nice to see this fifty-year old franchise more or less standing tall once again.

With opening credits straight out of an old-school monster movie, Godzilla initially has the look and feel of Spielberg movie for about the first ten minutes, with the same sort of expositional prologue one may have seen in Jurassic Park, Close Encounters of the Third Kind, or even Jaws (which has clearly guided Edwards in his handling of how and when to reveal Godzilla).

The film opens with Bryan Cranston and Juliette Binoche playing a husband-and-wife team working at a Tokyo nuclear plant who rather quickly find that the company benefits package may not have been worth the move.

After jumping ahead 15 years, and providing the first tonal shift into much darker and somber territory, we are introduced to the now-estranged son of Cranston and Binoche, played by Kick-Ass’ Aaron Taylor-Johnson and a buttload of protein powder, who is a soldier and family man who would like nothing more than to leave the past in the past (whatever it was that happened).

Some MUTOs (massive unidentified terrestrial ogrganismns) seem to have other plans and before long, we have the iconic moment every good – or bad – monster movie needs: people running away in a panic while looking back at their impending doom.

But there’s only one true star in this show and, along with Ken Watanabe as a scientist who also seems to be doubling as his press agent, Godzilla shows up to push the movie into the place it belongs… a fun, over-the-top monster movie.

While Godzilla certainly swerves along the way, all the right beats are ultimately there: monsters fight, cities fall, people run and Godzilla stands tall.

It fed my childhood cravings, so I give Godzilla a solid B.