Getaway from this movie as fast as you can. 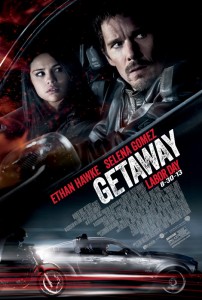 It is no secret that the end of summer is usually marked by a handful of below average movies. But that would be putting it lightly for Ethan Hawke and Selena Gomez’s so-called action/thriller Getaway. It has been quite some time since I have seen such an offensively bad, and downright insulting excuse for a film. The fact that this movie actually had a budget, and featured actors like Hawke and Jon Voight is beyond baffling. Rather than focus on developing characters or cutting clips together in a cohesive manner, we get a 90-minute long mess of a car commercial that isn’t fit for public access.

Brent Magna (Ethan Hawke) is a former race-car driver, whose past affiliation with the sport is never revealed. He finds out that his wife Leanne (Rebecca Budig) has been kidnapped by an unknown villain, and is lead on a wild goose chase around the streets of Sofia, Bulgaria. He is forced to follow the every instruction of the anonymous caller, while commanding a “Super Snake” Shelby GT500 Mustang that belongs to a punk kid (Selena Gomez) who tries to get her graduation present back at gunpoint. Left with no other options, Brent is forced to take her with him as he races against time to get his wife back.

Judging from the trailers early on, it was clear that Getaway would have trouble pulling away from anything more than mediocre. Yet with an established actor like Ethan Hawke, a souped-up GT500 and the promise of all practical effects and no CGI shenanigans – the film could have at least had its moments. Unfortunately for anyone who happens upon this atrocity, there are absolutely no redeeming qualities to be found. The film is downright insulting in the way that it expects the audience to buy into its ridiculous plot devices. At one point Gomez’s character conveniently hacks the servers of their captor using an iPad (because that happens), and in another scene she barely touches a camera on the front of the car to convert it from recording into a live stream straight to the police station.

The entire film is one long chase-scene. While in theory it sounds like it could be entertaining, it is most certainly not in this case. First and foremost, any character development was foregone for an abundance of poorly filmed and disjointed driving cuts. Therefore you never care about the outcome of any one circumstance in the movie. All chances of enjoying the tedious car chases and crashes vanish as they come off as nothing but boring. Given the resources, I can’t explain how director Courtney Solomon could have let this film crash and burn so badly. But there is no doubt that the entire thing is one big car wreck from beginning to end.

Ethan Hawke is a fine actor, and is certainly not at blame for the film’s failure to amount to anything worth watching. At its root, the script is terrible – and no amount of acting is going to fix that. Selena Gomez, on the other hand, is awful in every way possible. She has no business being cast in the role of intelligent teenage computer hacker. Never for a moment is her performance believable, and it comes off downright humiliating for the actress. Gomez was certainly one of the weakest parts of Spring Breakers earlier this year, and has yet to show any signs of credible acting talent.

The scope of Getaway is extremely narrow. Every shot is filmed so closely that you can hardly tell what is going on with the action. And the editing doesn’t help, mashing together a second or two if you are lucky before moving onto the next unidentifiable clip. Furthermore every scenario seems exactly like the last. They could have easily filmed one sequence and played it on repeat for 90 minutes – it would be hard to tell the difference. There is no creativity or originality when it comes to the chases in the film.

I wish I could say there is a reason to see Getaway, but there honestly is not. If you are a fan of Ethan Hawke, there is nothing here that is going to make your day. If you love movies about car chases, it would seem to be the perfect film for you – but it is far from it. It is hard to believe that such a terrible film was made, given an $18 million dollar budget and some decent talent. But the result is easily one of the worst movies of 2013 so far – and it is going to be tough to steal the title from this one.

Getaway is an F