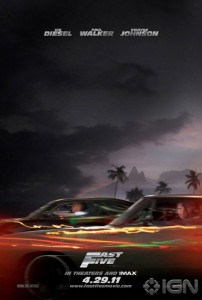 Ask any art lover, and they’ll be able to give you a solid critique between classic art, and pop art. Both have their merits, but pop art is considered by a lot to contain less value (because if everyone loves it, it can’t be unique right?).  Fast Five is the cinematic version of pop art, lots of fluff, and fun to watch, but when it comes down to it doesn’t really have a lot of substance.

The gang is back from the Fast and Furious films, and when I say gang, I mean people from throughout the series. The details aren’t that important, all you need to know is that the gang are looking to steal a massive amount of money from a drug lord, and they must do it while they have a US Federal Agent on their tail.  Fast Five is a potent mix of the adrenaline pumping car chases of the previous films, with a heist that feels like a toned down Ocean’s Eleven film.

If you are going to the theater to be entertained, and don’t want to have to think too much, Fast Five is the perfect film for you. There is a discernible plot, but it really is only there to bring you gratuitous action scenes.  So much of the storyline seems to be in place to bring in cool action concepts we’ve never seen before, such as two cars chained to a bank vault leading cops on a high speed chase. Yes, you heard that right, doesn’t sound possible right? Doesn’t matter the result is a cool looking scene that is thrilling in a visceral way.

Despite it being a lot of fun, Fast Five does have its fair share of problems. The dialogue for one is absolutely atrocious at times, with Dwayne Johnson delivering the cheesiest of the lines.  Most of the laughs from the crowd were genuine, but there were a few moments of “Did he just say that?” type of laughter that only comes with the worst of spoken lines.

Your feelings about this film are all going to be decided by if you can check your brain by the door or not. Once you think about it even a little bit, the plot falls apart, and you realize that the majority of the characters are stereotypes that really only recite a few clever lines to get you past this fact. If you go in just expecting a bit of fluff, and a lot of action, you’ll be ready to start the summer movie season.