Movie Review: ‘Fast and Furious 6’ Has Fast Cars, Big Action, But Doesn’t Fire on All Cylinders 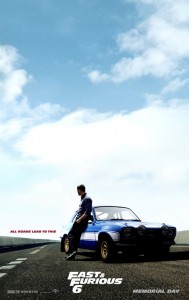 When a young Vin Diesel and Paul Walker graced the silver screen in The Fast and the Furious in 2001, it was never expected we would see them in the fifth sequel nearly thirteen years later. The first film was blatantly similar Katherine Bigelow’s 1991 film Point Break, but was smart in how they adapted it to something the male culture clings to – fast cars. I enjoyed the first film, and thought it was a lot of fun. But when 2 Fast 2 Furious came out in 2003, I thought the series had blown all four tires. 2006’s Tokyo Drift was better, with some of the best racing scenes in the series, but still didn’t match up to the original. And then Fast and Furious hit theaters in 2009, bringing back the original cast – and with them, what made the first film so great. By that time they had the budget to make an even better film, and a huge following to go see it. The success of the fourth film spawned Fast Five, which was clearly the best film in the series – and an all around excellent action movie. Which brings us to Fast and Furious 6, a film which would aim to tie up any loose ends from the previous films, and bring the family back together once and for all. 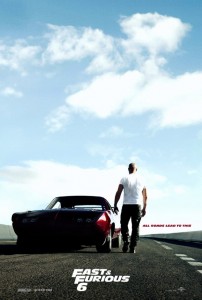 Although not completely necessary to enjoy the film, it is best to have watched the previous movies to really get a feel for the characters and what is going on. In a nutshell, Fast Five brought pretty much all of the characters from the first four films together and landed them in Rio de Janeiro. After breaking Dom (Vin Diesel) out of police custody, Brian (Paul Walker) and Mia (Jordana Brewster) also found themselves running away from the law. Along with their “family” comprised of Tej (Chris “Ludacris” Bridges), Roman (Tyrese Gibson), and Han (Sung Kang), they steal $100 million from drug lord Hernan Reyes – all while being chased down by DSS agent Hobbs (Dwayne “The Rock” Johnson). In Fast and Furious 6 Hobbs tracks down Dom, not to bring him into custody, but to ask for his help. His target is former special operative Shaw (Luke Evans), who is trying to steal a computer chip that can take the globe offline. Although Dom is happily retired, he is motivated by a picture of former girlfriend Letty, whom he knows to be dead. In exchange for the help of Dom and his crew, Hobbs promises to take him to her – along with full pardons to finally come back home.

For any of the ‘Fast and Furious’ films there is a certain suspension of disbelief that is mandatory to make them enjoyable. With that being said, prepare to be blown away. I have no problem with unbelievable stunts and action sequences to move the story along in a movie like Fast and Furious 6. It sure isn’t the acting or the script you are going to see. If you are, then you have come to the wrong movie. However this sixth installment pushes the envelope when it comes to ridiculousness, which at times isn’t necessarily a good thing. Fast cars, shootouts, explosions, spectacular stunts – they are all here. And there is certainly a lot of fun to be had. But there are parts of the film that director Justin Lin stretched too far, which is strange seeing as he directed the last three films as well. Especially when he describes this movie as the “B” in an A/B type story with Fast Five. I’m not sure if it was the studio pushing him to go big or go home, but it just didn’t seem to feel right at times.

One of the most spectacular action sequences in the film is a showdown that takes place on a runway in Spain – in and around a cargo plane set to take off. The scene is 15-20 minutes of non-stop action, which is sure to please most audiences. But at the same time the plane is going most likely 150 to 200 miles per hour the whole time, equating to a 50 mile or longer runway. That is sure to be frustrating to some, as it is just plain preposterous.

As a fan of the series, I was disappointed with the writing and most of the story in Fast and Furious 6. I felt like the fourth and fifth films in the franchise were the best yet, and was really expecting something great out of the newest member of the family. As mentioned previously, these type of movies aren’t the ones you are coming to for the writing – but at some point a sloppy script starts to take away from the overall experience. I wish they could have cleaned it up a bit and made things just a bit more believable. Luckily some great action scenes salvage this entry from becoming a complete mess.

For those who love the ‘Fast and Furious’ movies, fast cars and plenty of action – there is a lot to enjoy in this film. If you can look past the dialogue and some ridiculous parts of the story, you are in for a high-octane thrill ride that doesn’t require much thought.

Fast and Furious 6 is a C