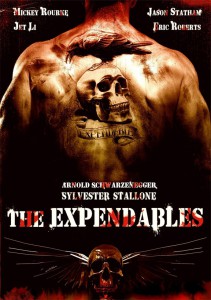 I went into the theater for The Expendables with mixed ideas. I read bad reviews. I read good reviews. I liked certain actors and hated others. I wasn’t really a big fan of the trailers. I thought that it was a film trying to be something that didn’t really exist on the big screen anymore. I left the theater thinking the same thing that I walked in thinking.

If you have seen the trailer then you have a pretty good idea of what the story is going to be. There are no surprises which makes it easy for me to be spoiler free. Stallone plays Barney who is the leader of a mercenary group that includes most of the cast the film loves to brag about. The group takes on a mission that looks to be a lost cause. After an hour of story (that term is used loosely) we get a climax worthy of all of these action stars.

There are so many aspects of this film going wrong. The dialogue is not the worst I have seen this summer (that top honor goes to The Last Airbender), but this dialogue is very close. The special effects are bad in many scenes featuring characters riding in cars or planes. The blood effects are sub par, and this film is not shy about showing the blood. The actors also seem to know that they are in a bad film which results in them playing up their character even more, and some of the actors are just plain bad.

Obviously all of these complaints are exactly what Stallone is going for, and despite all of my problems with the film, I can’t say that I hated it. There was entertainment value there for about half the film. Stallone tries to achieve the type of film he starred in years ago, and I think that he does so. This is definitely something that would have been a huge blockbuster in the ‘80s. But today, there are far better action films coming out in theaters on a regular basis. I would rent this film if you are dying to see it, but if you miss it entirely that’s okay too.