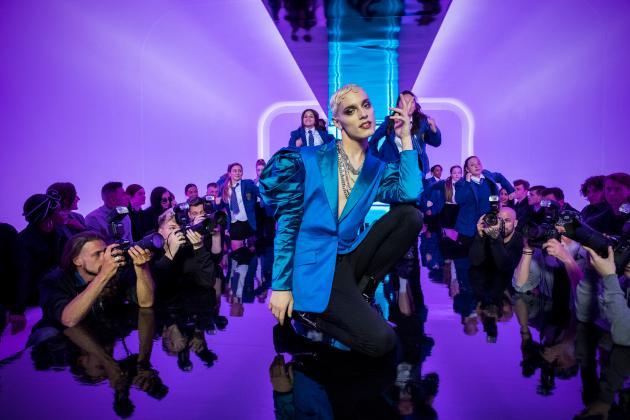 Wouldn’t it be nice if everyone could just be themselves, and be accepted for who they are? We all have dreams, and hopes, and you shouldn’t be afraid to pursue them. Everybody’s Talking About Jamie is a beautiful, heartwarming musical based on a true story, about being yourself and embracing what makes us all different.

Jamie New (Max Harwood) is a high school senior in Sheffield, England who is unapologetically himself. He and his mom (Sarah Lancashire) have a lovely relationship, but his father (Ralph Ineson) has been distant ever since he was young. Jamie has been saving his money for a pair of red, sequined high heels – but even his best friend Pritti (Lauren Patel) doesn’t know his dream is to wear them as a drag queen. Not knowing exactly where to turn for guidance, he visits a dress shop owned by Hugo Battersby (Richard E. Grant) – a famous drag queen who teaches Jamie how to embrace the person he knows he is inside.

Something that stands out right away is the support system Jamie has with friends and family. Usually, in a film like this, we see parents that don’t understand their children, and friends who don’t know how to process the new information they are given. But right from the start, we see how much Jamie’s mother loves him and encourages him to be happy – working extra shifts to pay for his birthday celebration, and helping him toward his goals. The relationship between Jamie and his mother is one of the most beautiful ones I’ve seen in recent memory, and so refreshing not to get the typical conflict. Where those issues come in is with the father, and make for an excellent commentary on expectations we put on our children – and the duty to love them unconditionally. Both storylines are handled quite well, in a heartbreaking and sincere fashion.

The music of the film is fantastic, based on the stage musical by Dan Gillespie Sells and Tom MacRae. The colorful and energetic numbers are full of interesting camerawork and dazzling choreography. The film is gorgeously shot, and there are some really creative dream-like sequences that take place throughout the film. They also play with reality, in a way reminiscent of some of the scenes in the delightful Rocketman.

Hardwood is excellent in the lead role, never ceasing to feel authentic or true to the character. His charisma leaps off the screen, as the actor gives a genuinely moving performance throughout. The chemistry between him and Lancashire is sweet and touching, and the same extends to heartfelt moments with both Patel and Grant. Speaking of Richard E. Grant, who is always fantastic, the actor does a great job with some heartbreaking material of his own.

This is a wonderful story, and there is no question as to how Jamie became the subject of a documentary that became a hit musical. Director Jonathan Butterell, who also directed the stage version, does a fantastic job of adapting the show for the big screen. Full of many wonderful and memorable performances, great songs, and mesmerizing camerawork, there’s no doubt that everybody will be talking about this new musical.