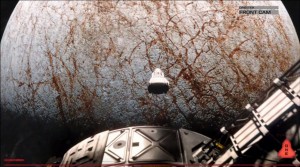 Within the mainstream audience, independent film is often thought of as stuffy and pretentious – period pieces with subtitles or single set dramas. With the exception of the subtitles, you could make the argument that Europa Report falls into each of these categories – you could also make the argument that Europa Report is a rather unique thriller that is extraordinarily accessible to mainstream audiences.

Europa Report is also one of the more recent films to take some liberties with its release schedule. It hit theaters in a very limited release on August 2nd, 2013, but has been available OnDemand since June 27th. As one of ReviewSTL’s resident CordCutters, I had the pleasure of watching Europa Report on Google Play via my new Chromecast and found the film very engaging.

Written by Philip Gelatt and directed by Sebastian Cordero, the story is set in the near future and surrounds the first group of astronauts to venture into deep space – a mission to Jupiter’s moon, Europa. Thematically a mix of 2001: A Space Odessey, Prometheus and Sunshine, Europa Report breaks away from the pack by integrating found footage, “interviews” with the launch crew and traditional cinematography that is gorgeous.

The majority of the cast will be unknowns to mainstream audiences, however film buffs may recognize a few familiar faces. Sharlto Copley (District 9, Elysium) and Michael Nyqvist (Original The Girl with the Dragon Tattoo, MI: Ghost Protocol) star as two members of the team of astronauts that struggle with finding life on Europa.

The performances are ultimately the greatest strength of this film. As a found footage movie, these performances have to be 100% believable as real people in real danger – and they somehow manage to pull it off. Similarly to the performances, the sets, mood and special effects come across as completely authentic. The way the filmmakers inter-splice the found footage with “interviews” of the ground control team give Europa Report a documentary feel that only adds to the realism. If there are any gripes with this movie it’s that it may be too realistic. While effective at conveying suspense, terror, fear and isolation, it isn’t always engaging. Europa Report often expects a lot of its audience to stay with it and pay attention – more casual watchers may be lost with the plot and/or its loose use of technical jargon.

If you’re even mildly open to independent film, I’d highly recommend Europa Report. It’s currently available for rent OnDemand, on Google Play, Amazon Instant Video, iTunes and Vudu for around $6.99. If you live in select markets you can catch it theaters starting 8/2 and it will be available on DVD and Blu-Ray on 10/8. If you absolutely refuse to see a movie that wasn’t funded with the traditional studio system, check out Sunshine instead – it’s a similar story with a more Hollywood feel.

Have you seen Europa Report or Sunshine (or both)? Let us know in the comments section below – and don’t forget to “share” the article if you liked it. – @KuroMB