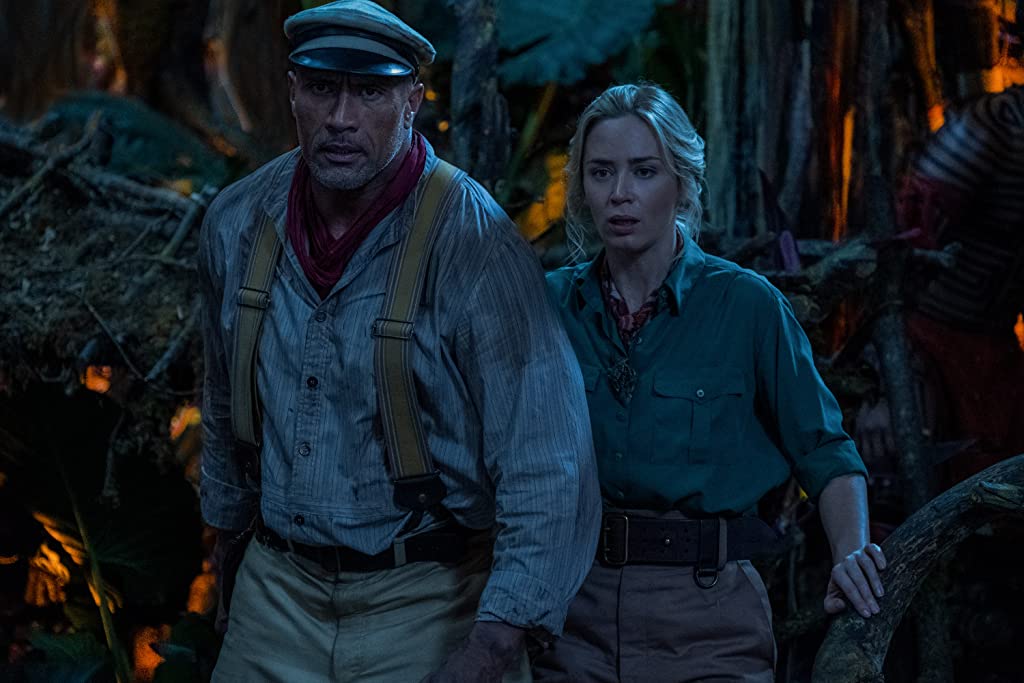 Back in 2003, Disney captured lightning in a bottle with Pirates of the Caribbean, based on their popular theme park rides in Anaheim and Orlando. As fun as those rides are, never in my wildest imagination did I think they would translate into one of the greatest modern blockbusters of our era. If it worked for Pirates – and it certainly did with five feature films and a reboot on the way – why wouldn’t it with Jungle Cruise?

Enter Dwayne “The Rock” Johnson, former wrestler turned biggest movie star in the world. He’s a sharp businessman who comes with a built-in PR campaign (under his Seven Bucks production company) and worldwide renown. He’s also labeled himself as “franchise viagra” (see the Fast & Furious) – but he is still in search of one to call his own. Enter Skipper Frank.

Set against the backdrop of World War I, Dr. Lily Houghton (Emily Blunt) is searching for the fabled “Tears of the Moon,” a flower that can cure any sickness with only a single petal. Along with her brother MacGregor (Jack Whitehall), she manages to steal the key to finding the mythical plant out from under the nose of Prince Joachim (Jesse Plemons), who wants to use its powers for nefarious purposes. In order to find the flower before the bad guys can catch up to her, she enlists the help of Frank (Johnson) – who has a vast knowledge of the jungle, despite operating a run-down touring service.

The film is an entertaining enough way to kill two hours, but often feels like it is trying too hard. Capturing the magic of the Pirates movies (especially that first one) is no small task, and Jungle Cruise feels like it is trying to push the envelope where they should concentrate on giving us characters we care about. Instead of delivering an action-packed adventure where it’s simply a race to the treasure – Disney opts to go for a film full of ghosts, curses, and monsters. This in turn creates a bunch of unnecessary, and unrealistic-looking CGI nonsense. Much of the action feels like lifeless greenscreens, and it ultimately detracts from the fun of the story.

I am a big fan of The Rock, but much of the attempted humor in this film comes from the same place he goes in Hobbs and Shaw – bickering back and forth with Emily Blunt and trying to prove he’s the best at what he does. Johnson is extremely charming and charismatic in real life – and most of his roles – yet here his understated performance as Frank comes across as boring. If Jack Sparrow was portrayed like this, instead of cool and confident, he wouldn’t be an iconic character. Unfortunately, Skipper Frank is never going to get there.

Blunt is fantastic as Lily, and it would be great to see her go on more adventures. She’s a well-written character who doesn’t wait around to be rescued. It’s a nice role reversal to see her take the lead for much of the movie, instead of the typical damsel in distress we’ve come to know in these types of adventures. She and Whitehall play well off one another, and come across as siblings who are very different but would do anything for each other.

Seeing Jesse Plemmons play a scenery-chewing, mustache-twirling villain is fun. It’s always a pleasure to see him show up, I just wish his character could have been written a bit better. But the role does fit in the world the film creates, even when he goes for broke on the cartoon villainy. Speaking of which, Paul Giamatti shows up for a few minutes in a thankless role as a rival tour boat operator. What a waste.

Fans of the Jungle Cruise will not be disappointed with the amount of Easter Eggs and puns that are packed into the film. That is one element they certainly got right. Johnson’s character has many of the skipper jokes we’ve groaned to love over the years, and it is a nice touch as he takes a group on a tour that is very similar to the ride in the beginning of the film.

I had high expectations for Jungle Cruise, and maybe that is where I went wrong. The movie is still fun and entertaining, but it is lacking the magic of the franchise it wants to be – or the epic adventure of a film like John Carter. Too often does it feel like an imitation of blockbusters that have come before it, and not enough like its own thing. A little bit The Mummy, mixed with Romancing the Stone and, of course, Pirates – it would have been nice to see a bit more originality.

Now playing in theaters and streaming on Disney Plus with Premiere Access for an additional cost of $29.99.