You’ve watched the trailers. You’ve seen the billboards. You downloaded the leaked footage. You read the tweets. You listened to the interviews. 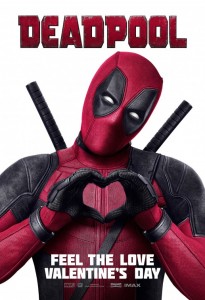 By now, if you haven’t heard there is a Deadpool movie coming out, I’m not sure how you are reading an online review (unless your grandma printed it out at the library and sent it over via carrier pigeon). Yes, that Deadpool. The “Merc With a Mouth,” Wade Wilson. If you aren’t a huge comic book fan, but the name sounds familiar – that might be because you watched the horrifically terrible 2009 film X-Men Origins: Wolverine. Although if you are saying, “wait, where was his iconic red costume, and didn’t that Deadpool have his mouth sown shut,” then you would be as puzzled as the rest of us who had to sit through that debacle. Yes, they sewed the mouth shut of a guy nicknamed “The Merc With a Mouth.” But I digress.

Luckily for hopeful comic book fans everywhere, THIS is the Deadpool we expected. Scratch that; this is the Deadpool that dreams are made of. That’s right. This movie gets it right, where so many failed attempts at bringing superheroes to life get it wrong. But as Deadpool himself says in the film, “you’re probably thinking, this is a superhero movie but that guy in the suit just turned that other guy into a f****ng kebab. Surprise, this is a different kind of superhero movie.” And he’s one hundred percent correct.

Deadpool is a HARD R. That means when the MPAA says it’s rated R for strong violence and language throughout, sexual content and graphic nudity – they aren’t messing around. Which means two things. One: if you are easily offended, this isn’t the movie for you. And two: it makes the movie extremely awesome, true to the source material, and one of the most fun times you’ll have at the theater.

Ryan Reynolds is Deadpool. And that isn’t to say just for the few months he has been filming the movie. Ryan IS Deadpool, and Deadpool is Ryan. This is the superhero that the actor was born to play, and he knows he only has one shot to make things right after his turn as Green Lantern Hal Jordan (but he does have the film to thank for his now wife Blake Lively, and their recently born child – so that’s a plus). The character is a wise-cracking, lovable, foul-mouthed smart ass. Sound familiar? Although the actor has starred in television and minor films roles since the early 90s, the first thing I really remember him in is the now-cult-classic Van Wilder in 2002. But it hasn’t been all comedies since then. Reynolds made his foray into action with Blade: Trinity, and then Smokin Aces. We’ll just breeze past the last decade or so, which lands us right here in 2016 – where he absolutely kills it as Deadpool.

I won’t get into the story too much, as part of the fun is watching Deadpool tell it through witty flashbacks and breaking the fourth wall. This is dangerous territory if not done properly, and vital to this character. However I’m happy to report that Reynolds pulls it off without a hitch, and it is one of the most charming parts of the movie. I’ll leave it to the merc himself to synopsis-ize for you,

I didn’t ask to be super, and I’m not hero. But when you find out your worst enemy is after your best girl, the time has come to be a f****ng superhero.

Morena Baccarin plays Vanessa, the woman who matches the perfect amount of crazy for Wade. But when they find out that he is sick, he has no choice but to seek the help of a mysterious man (Jed Rees) who recruits him for an experiment that can save his life. After reluctantly accepting the offer, he meets Ajax (Ed Skrein) – who is responsible turning him into Deadpool. But things aren’t as they appear, and Wade is forced to do whatever it takes to save Vanessa and get his life back.

T.J. Miller plays Weasel, the hilarious sidekick (if you will) to Deadpool. He is also the owner of a bar where his fellow mercenaries receive their jobs, called Sister Margaret’s School for Wayward Girls. Miller and Reynolds have tremendous comedic chemistry, and play well off of one another as they continuously give each other crap.

Making a film like this was tremendously risky. Without Reynolds pushing for it, and making it his personal mission to get Deadpool made, there is no way Fox would have let this rated R superhero movie happen. It’s too easy to try and make it PG-13 for the extra box office revenue, or simply say it just can’t work. Yet it can, and it does, thanks to perfect casting and the tremendous skills of director Tim Miller. Although this is Miller’s first feature, he was the creative supervisor for Scott Pilgrim vs. the World. And if you have ever seen that film, you know how visually incredible it is. Much of his expertise can be seen on-screen, proving that he knows how to make an extremely visual film.

Deadpool crushes expectations, and is exactly what it needed to be. Going into it I was a bit worried, thinking that the language or violence might feel too forced, and push the film to it’s limits unnaturally just because it can. Luckily that isn’t the case, and the result is an action-packed, hilarious and fun-filled movie that will support multiple viewings for years to come. And thankfully for comic book fans everywhere, Deadpool 2 has already been green-lit.

Congratulations Mr. Reynolds – you’ve did it. Welcome back.

Deadpool is an A.