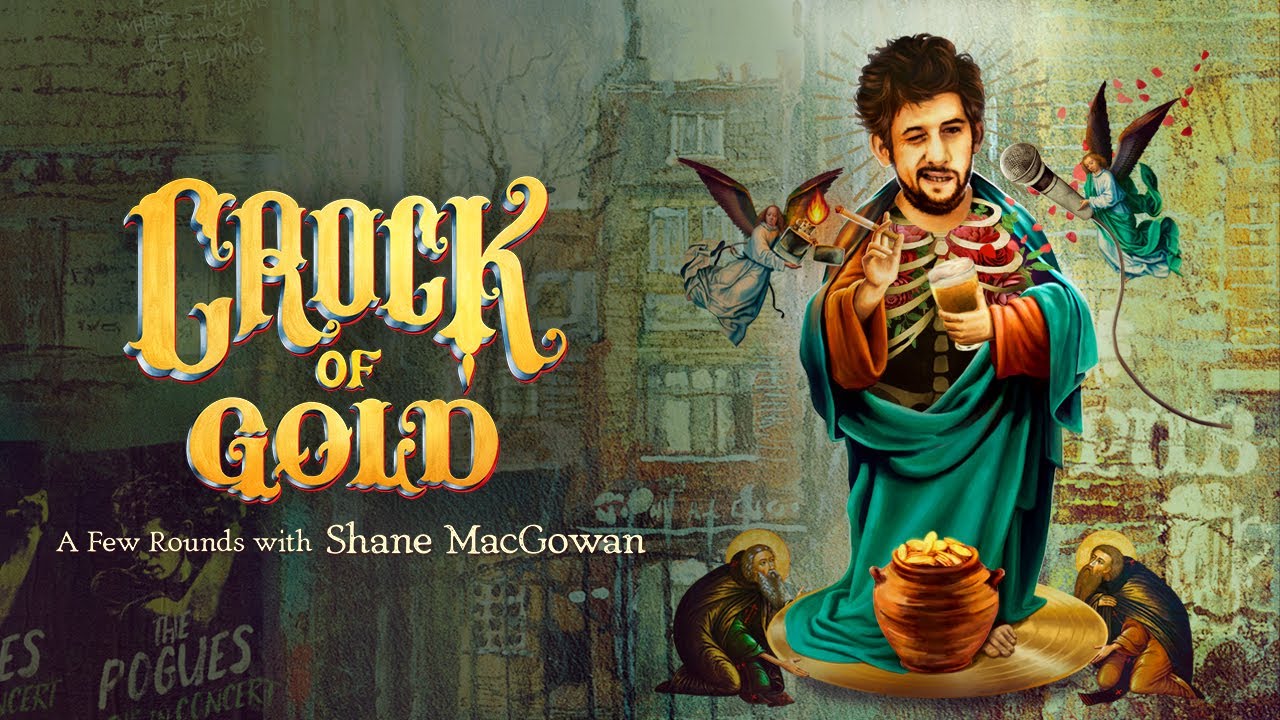 Tortured genius, savior of Irish music or just a performer recounting past glories? These are the complexities in play in Crock of Gold – A Few Rounds with Shane MacGowan, the newest film from Julien Temple.

Temple, who twenty years ago captured the essence of the Sex Pistols with The Filth and the Fury, is the perfect person to frame The Pogues vocalist’s storied life into a proper narrative. Hailed as a poet, the voice of modern Irish music and an iconic figure in the punk, MacGowan is often characterized as a drunk, a junkie and a roustabout whose brazen outspokenness and personal demons have often overshadowed his musical legacy.

For his latest film Temple again utilizes interviews, archival footage and animation from legendary illustrator Ralph Steadman to craft an engaging documentary about an innovative performer whose personal demons have driven his artistic virtuosity.

Reared on a common farm in Tipperary that also served as a sanctuary for Irish Republicans hiding out from the British, his early childhood was spent amongst a community that lived by their own rules. Here, MacGowan, who admits to thinking briefly about becoming a priest, developed his lifelong passions for Irish music, politics, drinking and rebelling against the system.

In a film filled with several powerful moments of reflection, MacGowan admits that he began drinking by the age of six. He also acknowledges that growing up in an atmosphere filled with hard work, radical politics, late night parties and heavy drinking helped foster a rebellious streak in him from an early age. Despite these negative influences young Shane bonded with his aunt, who nurtured his interest in writing.

As MacGowan notes onscreen, he easily could have spent his entire life on that farm in Ireland. However, since jobs were hard to come by his family needed to relocate in order to get on their feet. Settling in London from the age of six, a young Shane was later awarded a writing scholarship to a prestigious public school. Bullied and bored, he was miserable and began looking for kicks elsewhere.

Recounting how being Irish meant he never could really feel at home in England, MacGowan struggled to find himself in his adolescence. He eventually found his salvation in the city’s punk rock clubs. From here, Temple treads on familiar territory as he emphasizes how the drugs, nightlife and aggressive energy of that time pushed MacGowan to apply his writing talents and big personality to joining his first band, The Nipple Erectors.

By 1982, he was looking for something new. Eager to mix traditional Irish music with the angst of punk, he enlisted several of his Irish expat friends to form The Pogues. Sounding completely different from their contemporaries, they quickly took London by storm and became the darlings of the UK music press. Noted for their live shows The Pogues happened at the perfect time. Developing his skills as a songwriter and frontman whose lyrics spoke to both his fellow Irishmen and alienated British youth.

After recording five albums and breaking in America with The Pogues, MacGowan succumbed to the trappings of fame. While he loved being famous but reviled the grueling rigors of touring. This constant duality would haunt him throughout the next decade as he found himself constantly on tour.

As the band continued to sell records and build critical praise MacGowan’s alcoholism and drug use worsened. Using interviews with his father and sister for context, Temple poignantly chronicles how the out of control singer clashed with everyone around him, including his manager, bandmates and record label. Angry, temperamental and often boozy, MacGowan’s public fall from grace was epic.

At this point Temple’s film could easily have painted his protagonist as a sympathetic victim. Instead, he gives viewers an alarming portrait of self-destruction as he delves deeper into the forces that drive him. Adept at getting his subjects to open up, Temple gets MacGowan to speak candidly about his past troubles and bad decisions.

On camera MacGowan calmly converses about his legacy and his beloved Ireland with former Sinn Fein President Gerry Adams. He also chats with his friend Johnny Depp (who also produced the film) about The Pogues’ demise and how, despite feeling that he was sent by God to save Irish music, he was fed up with his band’s direction and wanted out. MacGowan also doesn’t hold back in criticizing Elvis Costello whom he fought with during the recording of Rum, Sodomy and the Lash.

These exchanges serve as a lynchpin for Crock of Gold to focus on the next chapters of his musical career and his ongoing battles with addiction. After establishing himself as a lyrical genius with The Pogues (and later on) The Popes, MacGowan appeared almost unrecognizable to his sister and close friends. Knowing he was sliding into an abyss, he finally decided to get clean, get married and get his house back in order.

Time has not been kind to MacGowan. Wheelchair bound after suffering a broken pelvis in 2015 and a body battered from years of alcohol and drug abuse MacGowan remains opinionated and feisty as he leaves the door open for making music again when he is physically able to.

Despite not interviewing any of MacGowan’s bandmates Julien Temple has made a well-paced and unflinchingly gritty film. Rough and worn around the edges Crock of Gold is an excellent study of a musical chameleon whose real-life antics often mask a genius whose legacy transcends generations.

Released by Magnolia Pictures, Crock of Gold is streaming now.