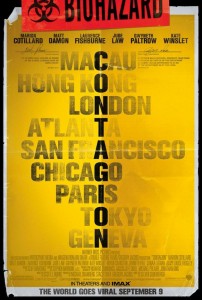 Anyone who has ever had the flu can agree on one thing, it really sucks, but most of you wouldn’t say it is scary. If you’ve ever read Stephen King’s The Stand you probably are in the group that is already scared of the possibility of a super-flu.  However, most of you probably take your flu shots, and then just work through a bit of discomfort and go about your lives.

Contagion takes a look at what would happen if a serious strain of the flu (or other similar infectious viral disease) were unleashed upon the world. The results aren’t pretty, millions dead, mass rioting caused by mass hysteria, and that is only in the first couple weeks. What happens in the aftermath of all of it? How would you feel if you had to wait months or even a year to receive a possible vaccination? Contagion asks all of these things, and puts it against the backdrop of a multitude of characters. The response of each character is different, while some rise above, others fearfully close themselves in their houses, and others even take advantage of the situation to soothe their lust for money.

What makes a film like Contagion work is the reality of the situation. Throughout history we’ve had mass outbreaks of disease, from the Bubonic plague to small pox; there have been many viruses that have wiped out massive portions of the population. We’ve even had a few scares here and there recently with things like the bird flu epidemic. Luckily, science has prevailed in almost every incident, and most of us have gone about our lives and forgotten the hype. Contagion presents the disease in such a way that it is actually scary. Every cough, sneeze, or sniffle in the theater is enough to make you think twice about not washing your hands after leaving.

Honestly, at times Contagion feels like 28 Days Later minus the zombies. It has all the post-apocalyptic feel of a zombie flick, with none of the outstanding gore. Imagine if the setup for a film like 28 Days Later went on for an entire film, and you’d have a feeling about the scale of Contagion.

Contagion thrives upon its excellent cast consisting of A-list actors such as Matt Damon, Jude Law, Kate Winslet, Gwyneth Paltrow, Marion Cotillard, Laurence Fishburne, Bryan Cranston and more. It is simply amazing when you see a film where 10 actors are all people who could easily be headlining their own film.  Director Steven Soderbergh’s great attention to producing solid characters give his actors a great space to work in, and lend an amount of credibility to what could have easily been a B-movie thriller.

If you are looking for a thriller that asks questions on a social, economic, and political level, Contagion is a must see. If you could care less about human relationships, and how they are affected by disaster, then most likely Contagion is not going to be your type of thriller. First and foremost, the draw here is the level of detail of the production, and the all-star cast.