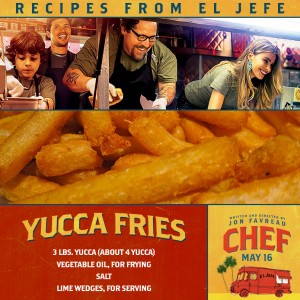 Jon Favreau is used to putting out huge, summer action flicks, like Iron Man 1 and 2, as well as the dud Cowboys and Aliens, but this summer he’s not blowing up anything, he’s cooking. Chef is Favreau’s latest project, and a welcomed departure from summer action flicks.

Favreau directed, wrote, and stars in this low-budget comedy about a Los Angeles celebrity chef named Carl Casper. Casper is living large, running the kitchen of his boss’ upscale restaurant. Casper’s boss, played by Dustin Hoffman, fires the head of his restaurant after Casper goes on a viral tirade after receiving less than stellar reviews from a well-known food critic. Out of a job, Casper heads on a cross-country journey in a food truck along with his 10-year old son. Once on the journey, the real cooking occurs, as Casper finds the ingredients that really matter in life.

Make no mistake about it, Chef may boast a cast of John Leguizamo, Scarlett Johansson, Sofia Vergara, Hoffman, and a small role for Robert Downey Jr., but this feast is all about Favreau, who in a sense goes back to his roots with Chef.

18 years ago, Favreau wrote and starred in Swingers, a film that put him on the Hollywood map. He has since gone onto bigger films like the first two Iron Man films and Elf. I always felt that Favreau was better suited for smaller budget films, where he has the control. Seeing him in Chef is almost like seeing a lost dog returning home after being away for a long time. Not that his work was bad in those big Hollywood blockbusters, I just think he is at his best when it’s his film, much like Swingers.

Chef has the feel of an independent film, until Downey Jr. shows up to give the film a little zest. RDJ’s small, yet important role is just what the film needs. The acting in the film is top-notch and really lends itself well to Favreau’s well-written story. Now for the negative, which there isn’t a whole lot. I am not a fan of Vergara, who plays the ex-wife of Casper. I quit watching Modern Family because I found her so annoying, and she pretty much ruined any chance of me liking the Machete sequel. She is just like that annoying Parrot that keeps yapping and repeating itself over and over. I just cringe at the sound of her voice. Luckily, I was able to swallow the bad taste of her being in the film and still manage to enjoy the movie.

If you’re looking to see a laugh out loud comedy, this would not be your main course. Yes, there are some laughs, but if an all out comedy is your taste, Chef is merely an appetizer. I’m not saying that is necessarily a bad thing either, as this film is a nice movie. It’s rated R, but it’s really a movie for the entire family. Favreau has cooked up a light-hearted, tasty film, with portions of comedy sprinkled in. It’s a perfect meal for anyone looking for an all around entertaining and enjoyable film.

Chef gets a B.