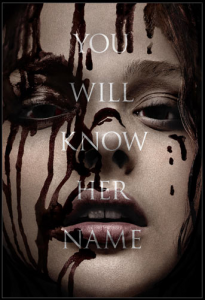 Ahh, the dreaded remake of a classic film. Likely the thought of some Hollywood executive who caught the original on television and thought, “You know what? It was so perfect the first time, why don’t we find a way to modernize and possibly ruin it?” Okay, so that probably wasn’t the thought behind the remake of Carrie, but it sure feels like it.

Carrie White is the progeny of an insane religious woman who mistakenly thought she had cancer, when she was in fact pregnant. (Who hasn’t made that mistake, right?) Rather than view the baby as a gift from her god, she immediately thinks of the child as a product of Satan, but stays her hand when she sees the baby. Now as you can imagine, if the birth is that complicated, things are going to go well in the upbringing of this child. The film starts with Carrie as a shy outcast in high school. Her sheltered upbringing causes major problem when Carrie experiences her first period in the showers at gym. She immediately freaks out at the sight of the blood, and is cruelly taunted by classmates when they realize she doesn’t know about her menstrual cycle. This moment eventually spawns a viral video, and Carrie becomes a social pariah at her school.

In steps the white knights of the story, Sue Snell (Gabriella Wilde) and Tommy Ross (Anson Elgort), the assumed prom king and prom queen of the high school. Sue feels remorseful for her part in the hazing of Carrie, and wishes to make it right. To make amends she convinces her boyfriend Tommy to ask Carrie to the prom. All of this creates an enemy of the vicious Chris (Portia Doubleday), and sets in motion a plan to embarrass Carrie at the prom.

Most everybody knows what happens in Carrie, and that is one of the problems encountered in the remake. There isn’t much added to the story, and ultimately it feels pointless. The use of the a cell phone camera to embarrass Carrie is probably the only worthy addition to this 21st century remake of the film. In this day in age where bullying has become even more prominent, the bullying of this film seems tame.

Chloe Grace Moretz has made a name for herself at a young age. Her performance in Kick-Ass landed filmmakers in hot water for using her as a very adult character, but there were no qualms with her performance. Her strength shone through in the character, and it is this strength that is one of the weaknesses of the film. Moretz is obviously a very confident young woman, and doesn’t quite nail the character because of it. Carrie should be frail, beaten down, and hopeless. Moretz is merely fidgety and quiet. Her transformation before the prom comes too sudden, and it doesn’t fit the story of a young woman who has been mentally and physically abused by her mother for years.

On the other side of the coin, Julianne Moore steals the show as Carrie’s mother, Margaret.  Moore plays Margaret with the fire of a fanatic and the blank stare of a psychopath. Moore makes the audience squirm with every line, and without her the film would have been even worse off.

The rest of the cast is filled with stars that appear to be plucked directly from a CW drama. Each member of the supporting cast is only given one emotion to display.  Sue’s one emotion is remorse, Tommy’s is kindness, and Chris’s is pure and unintentionally comical evil.  These one note characters are just more proof of a film that was merely made to cash in on the original’s success.

Carrie is a story that should fit easily within our times, but this rehash just feels stale and old. It’s a remake that will be forgotten as easily as the made for TV version that graced our screens nearly a decade ago.