“When you look into their eyes, you know somebody is home. Somebody’s looking back.”    – John Jett, Former SeaWorld Trainer 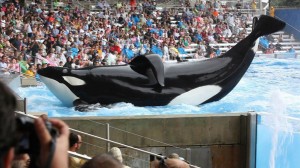 Those words, spoken by a former trainer in Blackfish, drive home a point that many, many people can easily forget – this is not a person in a costume, not an animatronic figure that is timed to move to the music. It’s a living entity… and the star of this particular feature has killed. 3 times.

Blackfish, directed by Gabriela Cowperthwaite, is not a sensationalistic spin on the deadly killer whale (hardly deadly, as there is no record of a killer whale attacking a human in the wild, according to the doc) or an activist piece, bent on dismantling and destroying the zoological park system.

Rather, the film is centered around Tilikum, SeaWorld’s 12,000-pound male orca that killed trainer Dawn Brancheau in 2010 – the third death attributed to him – and those who have worked closely with him over the years. This includes one of the whalers who stole him from his family as a baby, the caretakers and employees of the Canadian aquatic park he first presided at as a young calf (where he suffered abuse from all sides, including other, larger killer whales) and the half-dozen former SeaWorld Trainers who have come forward to dispel the myths and offer their testimony. 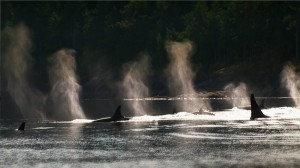 Tilikum, however, is not the villain – this particular whale, serving as a glorified sperm bank for SeaWorld, is the genetic source for over half of SeaWorld’s whales in their entire park system. While that is frightening, what’s more frightening is the knowledge that these whales have a sense of self, a sense of family, even a portion of the brain that humans even lack.

Hopefully this film will make a difference and we’ll collectively find is that maybe a corporate icon, packaged to sell millions of toys, balloons, refillable mugs and tickets, oh so many tickets, is less entertaining when we realize that it’s a living creature (I imagine the response people would have if, say Mickey Mouse, was an actual living being, dressed up and paraded once a day, then locked in a cell at night.)

Blackfish is brisk, doesn’t go for cheap shocks, and really serves as a device that should raise awareness and rattle some cages… and hopefully bust them open.