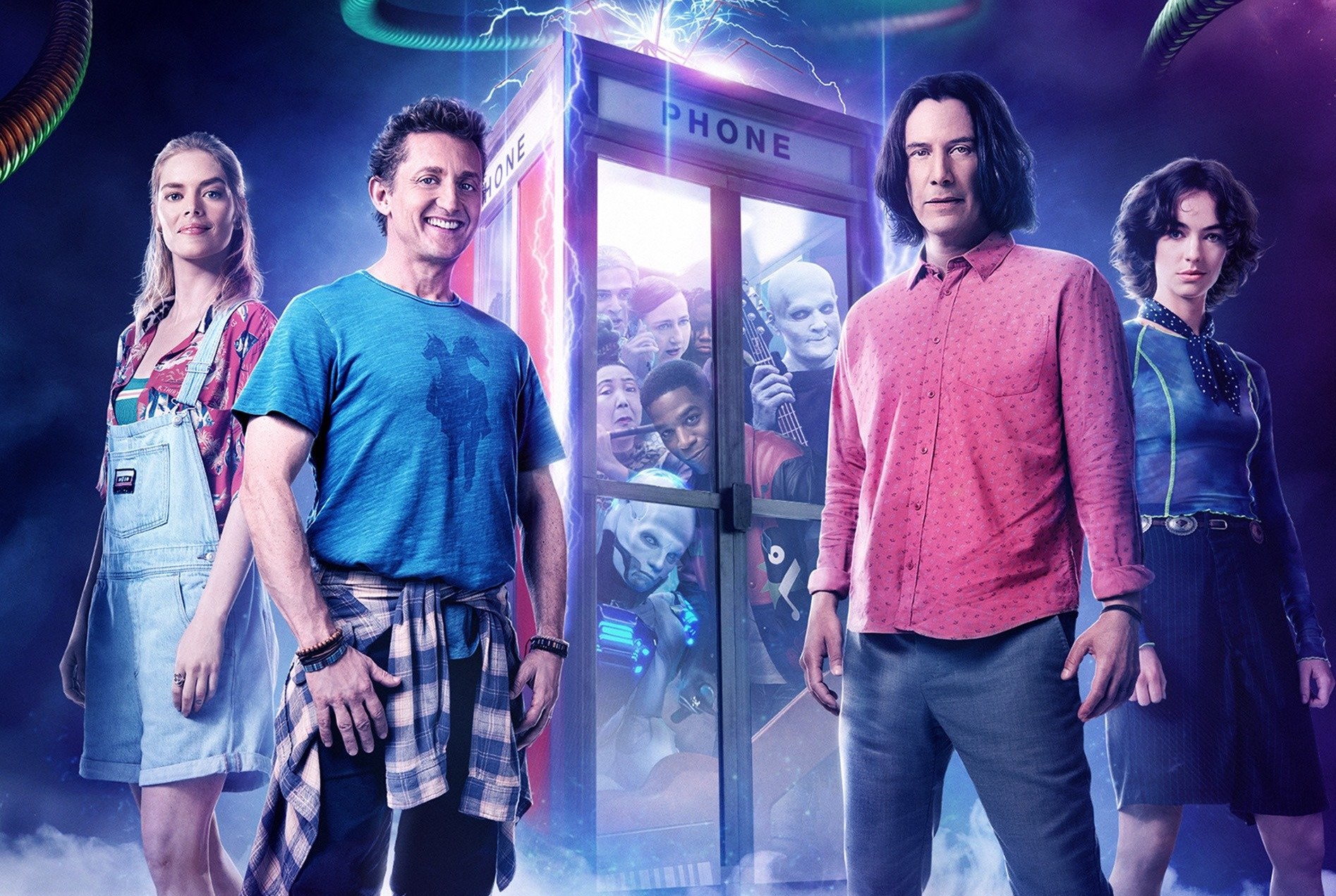 They’ve gone on an Excellent Adventure. They’ve had a Bogus Journey. Now it’s finally time for Bill and Ted to Face the Music.

Nearly three decades have passed since we’ve last seen our heroes. The beloved duo of Bill (Alex Winter) and Ted (Keanu Reeves) have grown up – but at heart they’re the same lovable bros who who love to rock out and party. And now they have kids of their own, who not only share their style – but their names as well. Here we are introduced to Ted’s daughter, Wilhelmina “Billie” Logan (Brigette Lundy-Paine), and Bill’s daughter Theodora “Thea” Preston (Samara Weaving).

Rather than use Winter and Reeves to set up the new “Bill” and “Ted” to go on their own adventure, the film does something rather admirable – giving both pairs a journey of their own. I imagined the film would sort of “pass the torch,” but it never feels like a cheap substitution or bait-and-switch. The original Bill and Ted are still the main focus, and there is plenty of fan service paid to the duo. This all makes sense given the writers of the film, Chris Matheson and Ed Solomon, are the creators of the first film and have worked on the series ever since. And as they’ve grown in their careers, so has the way they shape the heroes that they put to paper all those years ago.

As a fan of the movies, it’s fun to see the two actors on-screen together again doing what they do best. They never miss a beat, which makes sense knowing that Reeves and Winter have stayed friends and kept in touch all these years. It’s easy to see they are having a good time reprising their iconic roles, and it’s something most fans never thought they would see again.

It’s great to see William Sadler return as Death, Hal Landon Jr. as Ted’s dad, and Amy Stoch as Missy. Erinn Hayes and Jayma Mays join as the boys’ princesses – Elizabeth and Joanna. With Beck Bennett as Ted’s younger brother Deacon, and Kid Cudi as himself.

At the heart of the series has always been music and time travel. Face the Music focuses on both subjects in a creative way that pays homage to the previous films without feeling like a retread. There are phone booths, historical figures, and even Rufus’ daughter Kelly (Kristen Schaal) to set them on their path – yet the writers have crafted a clever narrative to keep things fresh and interesting. While the girls travel back in time to create the ultimate historical supergroup, Bill and Ted travel into the future to hopefully find their song that is supposed to unite the world – before it is too late. And on their search they run into multiple versions of themselves as they go further in time.

The makeup effects are excellent (pun intended). I was really impressed with the quality of the practical effects used to age up Bill and Ted through the years, especially when they meet their oldest versions. In a comedy like this one, you don’t necessarily expect (or require) the best effects to get the point across. However, the talented makeup department gave the film a boost with their skills.

Both Weaving (who was fantastic in last year’s READY OR NOT) and Lundy-Paine are welcomed additions as the daughters, and do a good job of harnessing the energy of their characters’ dads. Also of note is Anthony Carrigan (you’ll recognize him from BARRY, GOTHAM, and several other shows) who joins the cast as a robot sent from the future to track down Bill and Ted. I won’t say anything else, other than the fact that Carrigan is great as always.

BILL AND TED FACE THE MUSIC is a fun ride for fans who grew up with the series, and is packed with plenty of references, cameos, and Easter eggs to sate your appetite. It’s more of what you’d expect without delving into recycled territory. While not all of the jokes land like they used to, there is still a magical chemistry between Winter and Reeves at work. And this is a more mature version of the characters, who have grown along with the audience since their debut in the late ’80s. And don’t be surprised by the amount of heart this movie has.

Let’s just say the Wyld Stallyns still have it.