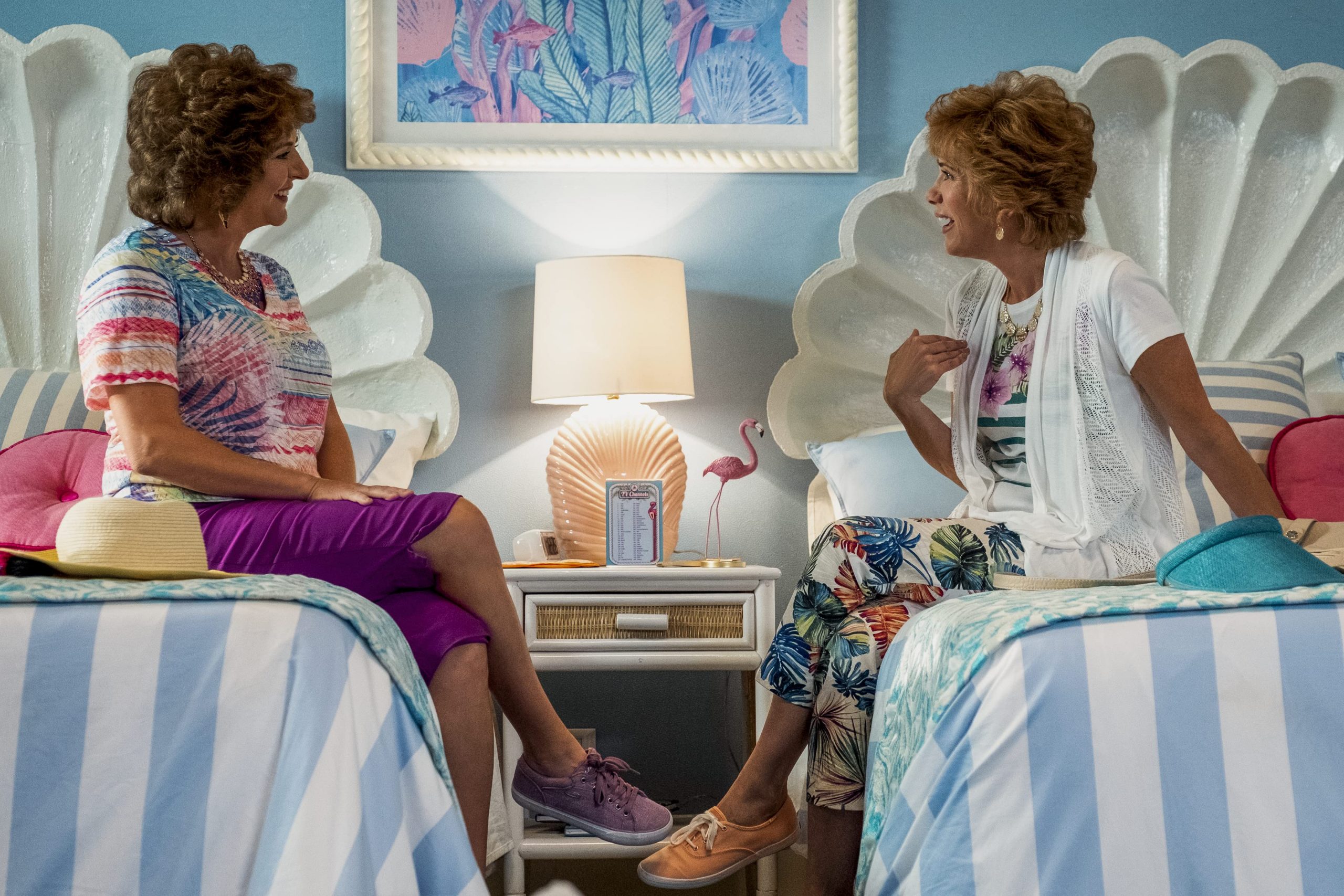 Kristen Wiig and Annie Mumolo, who co-wrote the hit comedy Bridesmaids, have reteamed to write and star in Barb and Star Go To Vista Del Mar.

Directed by Josh Greenbaum (who directed several episodes of television comedies like New Girl and Fresh Off the Boat), the film follows two middle-aged best friends who are looking to rediscover the fun they once had. What is so wonderful about the pair is that they are both genuinely kind-hearted and pure-intentioned people. And the film never has fun at their expense – they are simply delightful folks. It’s hard not to be enamored with their innocence and naivety.

After losing their dream jobs (selling furniture at the mall), they decide to take a vacation to Florida – specifically Vista Del Mar, at the recommendation of one of their old friends (Wendi McLendon-Covey) who seems trendy and still knows how to have fun. Yet, unbeknownst to the platonic couple, their destination is also the target of the evil Sharon Gordon Fisherman (also played by Wiig) who seeks revenge on the source of her childhood trauma. She sends her henchman, and not-official boyfriend, Edgar (Jamie Dornan) to enact her sinister scheme of releasing genetically engineered mosquitos upon the resort.

The film is very silly, and feels like an SNL skit adapted into a feature film – even though it is an original creation. But that isn’t necessarily a bad thing, especially if you like random gags and zany situations that don’t need to make sense. Think comedies like Hot Rod, or Popstar: Never Stop Never Stopping. Although it doesn’t ever quite hit the highs of those movies, it is fun and crazy enough to work.

You can tell that Wigg and Mumolo are friends in real life, as their chemistry is off the charts throughout the film. They bounce the jokes off one another with ease, making it look easy to come up with the silly one-liners. The two of them are not only talented writers, but both have a knack for physical comedy. Many of their facial expressions alone are enough to elicit laughs. We’ve seen it for years with Wigg on SNL, and it’s great to see Mumolo get a chance to shine in front of the camera with the same kind of zany antics.

With the two leads being proven comedic entities, the true surprise for audiences will be Jamie Dornan. Best known for his role in the Fifty Shades of Grey series, the actor is hilarious in the role. Bouncing between a wonderful deadpan delivery, and ridiculously random actions the next moment, his comedic sensibilities thrive. And he also is responsible for the funniest scene in the movie – a hysterical song that seemingly comes out of nowhere. You’ll know the one when it hits you.

Reyn Doi plays another henchman named Yoyo, whose running gag is how mature and competent he is at his evildoing for being a kid. He is a lot of fun to watch ham it up during his scenes.

Lots of familiar faces show up in the film, like the coffee klatch of friends played by Vanessa Bayer, Fortune Feimster, Phyllis Smith, and Rose Abdoo. And Damon Wayans Jr. plays a not-so-secretive hitman, who is terrible at his job but great at garnering laughs. There’s another surprise cameo I won’t spoil, but it lines up with just how ridiculous the film is and I was all-in.

From the beginning until the final minutes of Barb and Star Go To Vista Del Mar, you never quite know what to expect. Is it a buddy comedy? A musical? A parody? The answer is yes. Packed with random humor and fun-filled hijinks, it fells like a film primed to become an instant cult-classic. And the lovable duo is just so likable, it’s hard not to smile whenever they are on-screen.