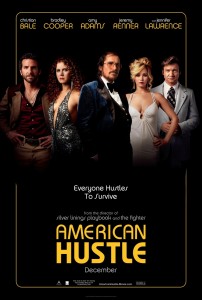 Director David O. Russel is certainly on a winning streak after The Fighter (2010) and Silver Linings Playbook (2012). Then again, looking back on his career, he’s never really made a bad film. Three Kings (1999) was met with almost unanimous praise from critics, and I Heart Huckabees (2004) is one of my favorite comedies of the 2000s. So it is no surprise that American Hustle, packed to the brim with talent, is one of the year’s best films.

Irving Rosenfeld (Christian Bale) is a con-man who has grown up learning how to hustle his way through life. He may be balding, and a bit overweight, but his confidence attracts the beautiful Sydney Prosser (Amy Adams), who eventually decides to become a part of his con-man empire. While the two of them take New York by the purse strings, Irving’s wife Rosalyn (Jennifer Lawrence) is at home with their son and a bottle of wine always near-by. The two are on top of the world until FBI agent Richie DiMaso (Bradley Cooper) crashes their party, and they are forced to work with him to avoid jail-time. Yet what starts off as a simple task turns into a much bigger con than any of them expect.

The film is full of fantastic performances all around. David O. Russel has assembled an all-star cast from his past triumphs, and the result is simply stunning. Christian Bale is commanding in the lead as the con-man hero of the story. Even though the character is doing bad things, it is hard not to like him. Bale is no stranger to transforming himself into his roles, and Irving is no exception. There are times where it is easy to forget their is an actor behind the balding confidence man, as the acting is that good. Amy Adams also gives an amazing performance as Irving’s partner in crime. For most of the film she plays a character who is actually playing another character – Lady Edith Greensly, who has royal banking connections in London. Adam’s gives one of the best performances of her career in the film.

Bradley Cooper gives a tremendous amount of energy as the unpredictable and passionate Italian-American FBI agent Richie DiMaso. His character will do whatever it takes to make a name for himself, even if it means bending the rules a little. While working with the grifters it is always tough to say who is really in charge, although Cooper’s character would like to think it is him. His chemistry with Bale and Adams is fantastic, and the performance adds a lot of humor to an otherwise serious film.

Another shining performance that cannot be overlooked is one by Oscar-winning actress Jennifer Lawrence. Coming off of the big win just last year for Russel’s Silver Linings Playbook, also starring Bradley Cooper, Lawrence once again knocks it out of the park. The talented young actress is so good in everything she does, and her performance in American Hustle is certainly no exception. Lawrence steals the show in just about every scene she appears in, and is an absolute delight to behold.

The look of the film is absolutely beautiful. Director of photography Linus Sandgren, who was responsible for the cinematography on Gus Van Sant’s Promised Land, paints a beautiful picture of 1970s New York. The camerawork is stunning throughout the film, and is the best looking David O. Russel picture to date.

No mention of American Hustle would be complete without talking about the music. The soundtrack is brilliant in representing everything about the time period, and helps to perfectly move along the story. Duke Ellington tells the story of Irving and Sydney’s introduction, Wings gives us insight into Rosalyn’s struggle with her husband, and Donna Summer shows us that there might be more to Sydney and Richie than meets the eye. Elton John, The Bee Gees, Tom Jones, America – the list goes on. Danny Elfman is responsible for the score, which is also fantastic.

One thing that I can say with absolute certainty is that David O. Russel is not going anywhere. The director has delivered a tour de force with American Hustle, from the acting to set design, cinematography to the music. Everything from top to bottom about the film is fantastic. The film is reminiscent of larger than life pictures such as Goodfellas and Casino, and is sure to go down as one of the classics right beside them.

American Hustle is an A+