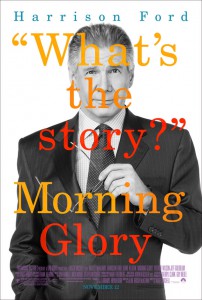 Morning Glory, while not exactly groundbreaking, is one of the better executed romantic comedies of late. The characters are well-drawn and the humor comes from them. While it’s not an uproarious comedy, when it does aim for laughs it almost always hits the mark. McAdams is charming and she easily carries the film. Her relationship with Ford is well-written and remains refreshingly professional. It was a nice change of pace for a movie such as this to focus on a topic other than will they/won’t they. Of course, it is a rom-com, so they do need a little of that. Thankfully, Becky’s love interest comes courtesy of Adam (Patrick Wilson), one of Pomeroy’s former producers and someone more “age appropriate.”

For some reason, Hollywood of late has loved to cast its romantic comedy leading ladies in the role of television producer. Knocked Up, The Switch and the reprehensible The Ugly Truth (to name a few) all come to mind. However, for all the films set against the backdrop of television, hardly any are actually about television. Morning Glory is a rare exception. Rachel McAdams stars as Becky, a woman whose goal in life is to become producer of The Today Show. When she’s let go from her producing job at a TV station in New Jersey, she catches a break by getting hired to run the long running (though little watched) show Daybreak on the struggling (and fictional) fourth network IBS. (Yes, I know that also stands for “irritable bowel syndrome” but I was never quite sure if the movie did.) The show she’s charged with helming is full of petty, backbiting, vacuous personalities who long to be anywhere but there. When she discovers that IBS nightly news anchor and broadcasting legend Mike Pomeroy (Harrison Ford) is being paid to not work because of his attitude she decides he is just the dose of gravitas the show needs. What she doesn’t bank on is that he’s a pompous, arrogant…well, gravitas-hole. The crux of the film is a battle of wills between Becky and Pomeroy as to what sort of news program they owe the public. News versus entertainment is an argument as old as television itself. It’s a tug of war that’s been going on ever since Edward R. Murrow hosted the celebrity oriented Person to Person. (An argument I kept waiting for someone in the film to make, actually.)

Sadly, the story does cheat somewhat on its core issue. (News can be light and fun AND deadly serious.) And Ford never really quite masters the cadence of a newscaster. Anchors have a distinct way of reading a story and it’s always been something of a pet peeve when actors play broadcasters and can’t seem to nail that sound. I would expect an actor of Ford’s caliber to be able to do that. But for what, at first blush, appeared to be just another rom-com retread, the film is much better than expected. McAdams shines and is surrounded by a solid cast creating movie that might not be original but was certainly well done.