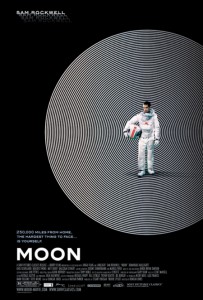 Duncan Jones makes his feature debut with this fantastic sci-fi film that digs into the psyche of the mind and what it means to be human and it is all fueled by a marvelous performance by Sam Rockwell.

Helium-3 has saved the earth’s energy problems. A world on the verge of destroying itself through pollution and death over the planets fossil fuels, the savior of all our problems comes from a substance that is able to be harvested from the dark side of our Earth’s moon. Lunar Industries is the company that has made this all possible and it maintains its crops and harvesters with one man out posted on their lunar base, Sarang.

That man is Sam Bell and he is at the very tail end of his three year contract with Lunar Industries as he anxiously awaits returning home to his wife and young daughter. As the final days wind down, Sam begins to start losing it a bit and finds himself trying to keep it together so as the robotic helper GERTY does not notice his ailments in fear of what might happen if he can’t finish out his contract. Passing the time as best one can, Sam, begins to have lucid dreams and sees odd visions that lead to an unfortunate incident and a mystery unfolds that he never even imagined possible that will cause him to look into himself and try and discover his true nature and place in life.

To spoil this film in anyway for you will only take away from any surprise and greatness this film can take hold over you. Revolving around almost exclusively Sam Rockwell as Sam Bell it seems like it might be quite the stretch that he can hold your attention for an hour and forty minutes almost single handedly, but the man does with relative ease. The role of Sam Bell allows Rockwell to wear many hats and show an extremely broad range and this film just goes to show that he is possibly the most underappreciated actor in Hollywood working today. The subtleties and nuances he brings to Bell are just perfect and give the character so much life and substance with us seeing very little of his life with even less back story. And the questions he has to grasp are handled in such a way that he also opens the viewer up to a lot to think about both Sam and the human existence and what that all means.

Now the film is a fairly heavy sci-fi affair. There are no aliens running amok or anything like that, it is just an idea film and is a wonderful study on the ideas it puts under the microscope. The film also plays its cards differently at almost every turn here as well and while some of these things might seem like you have seen these ideas before are kept fresh by Jones and writer Nathan Parker’s takes on the picture and Rockwell’s interpretation of all these ideas.

The film making in the picture is also top notch as well. An indie film, the production values and effects are just fantastic from start to finish. The moon exterior shots are wonderful and the set for the Sarang feels altogether classic sci-fi but futuristic in its look that it feels like an almost timeless film from the get go.

Kevin Spacey also deserves props for bringing GERTY to life and giving him the subtle emotions needed to go along with the robots “face” that provides a number of laughs in the film. And speaking of laughs, Rockwell charisma and humor shine through just enough in the picture to keep things a bit light in a rather dreary and perplexing situation the film takes us in.

Finally, the score by the great Clint Mansell is superb, giving Up’s score by Michael Giacchino a run for its money for best of the year. I was sitting there in the opening credits, which are also very well done even if they are a rip off of the Panic Room credits, and the music instantly captures your attention. And just as I was thinking to myself, “wow this music is great,” Mansell’s name pops up on the screen and it all made perfect sense. Now if we can only get him more work doing stuff like this and The Fountain more often.

In the end, Moon is an amazing sci-fi film and film in general. Hopefully it will not go unnoticed as Rockwell’s performance is worth the price of admission alone and Jones’ direction, storytelling, and filmmaking just happen to be superb as well. One of the finest achievements of the year so far, if you do not find this in my top 5 at the end of the year we have had our self a nice healthy dose of masterpieces in film for the 09 calendar.