The first week of the season’s come and gone, and I’m happy to report that the Cardinals managed to come out of Milwaukee with a 3-1 record (for the sake of convenience, I tend to start the sports week on Monday and end it on Sunday).

Opening up with the first regular season game in Marlins Park (more on that later), the Cardinals shut down the Marlins’ overhauled lineup and got to Josh Johnson early, knocking him out after six innings and winning 4-1. After a day off, they ruined the Brewers’ home opener, crushing Yovani Gallardo and the bullpen 11-5. Yesterday the team hit a speedbump in the form of Zack Greinke, but rebounded today to crush the Brewcrew 9-3 and take the rubber game of the series. 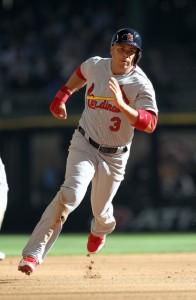 Carlos Beltran has been superb in his first four games as a Cardinal. Photo by Mike McGinnis/Getty Images North America

Even though the Cardinals got shut out Saturday (against Greinke, though, that’s not an uncommon occurrence), the Cardinals have demonstrated they have the capability to mash the ball effectively. Through the small sample size of four games, the team has gone 49 for 150, good for a .327 batting average.

The cream of the crop so far:

Carlos Beltran has also been spectacular through four games, hitting .389 and leading the team with two home runs.

Shane Robinson’s played in just two games, but he’s second on the team in RBI with four.

Even the guys who’ve been struggling a bit have shown signs of turning it around. Matt Holliday’s hitting just .167, but he did have a double and a single on Sunday. Tyler Greene failed to win the starting 2B job with a mediocre spring, but he managed to get an RBI single in his last at bat on Sunday.

When it was first announced Kyle Lohse would be the opening day starter, a few turned their heads. In hindsight, this shouldn’t have really been all that surprising when Chris Carpenter went down. Lohse was perhaps the Cardinals’ best starter during the regular season last year, and he dominated the Marlins’ lineup on Wednesday, taking a no-hitter into the sixth inning and a shutout into the seventh. Lohse went 7 1/3 innings and gave up just one run on two hits while walking none. Jaime Garcia had a rough first inning in his start, but fought through and ended up allowing two runs over six innings. In his first start filling in for Carpenter, Lance Lynn went 6 2/3 innings and gave up just two hits and one run while striking out a career-high eight batters.

The lone starter who struggled a little was Adam Wainwright, perhaps shaking off the cobwebs after missing 2011. Waino struggled a bit with his command (the first home run he surrendered to Corey Hart was a belt-high fastball he grooved to him), but he walked only one and struck out six in 5 2/3 innings.

Last year’s unofficial motto was “offense wins championships,” and it looks as though they’re built to hit again, but the defense appears to be stronger this year. Jon Jay, taking over the starting spot in center field, has been excellent, making several ranging catches I’m not sure Rasmus would have gotten to. The team’s committed one error so far through four games and has appeared fundamentally sound. Yadier Molina hasn’t even been tested yet. Playing against the Marlins and Brewers, who have several speedy guys who’ve stolen anywhere from 25-78 bases in a season, nobody’s attempted a stolen base against the Cardinals so far, and Molina’s even picked one runner off first (Ryan Braun).

If there’s been any real weakness so far, it’s been the bullpen. Lauded as a strength, through the first four games, the bullpen’s been somewhat inconsistent. The Cardinals have given up 15 runs in their first four games, which isn’t bad by any means, but only seven of those have been surrendered by the starters in 25 2/3 innings of work, good for an ERA of 2.45. The bullpen, on the other hand, has an ERA of 7.71, giving up eight earned runs in just 9 1/3 innings of work, although four of those have come in garbage time (McClellan gave up three runs when the Cardinals were leading 11-2, Motte surrendered a home run in the ninth today when the Cardinals were up 9-2).

There are some positives from the bullpen, though, the most notable being the lack of walks issued. In those 9 1/3 innings, the bullpen has yet to surrender a walk against fourteen(!) strikeouts. Mitchell Boggs has also been solid, yielding one run in 3 1/3 innings so far while striking out five.

Second base is still somewhat unsettled (that’s what the meh is for, not for the performance of Descalso and Greene). Realistically, this is perhaps the final chance for Tyler Greene to assert himself as a regular player, and he was moved from his traditional position of shortstop to second to give him more playing time, but Daniel Descalso has started three of the first four games. Descalso’s a solid defensive player (he was third in the Gold Glove voting at third base last year), but the Cardinals have always liked the potential in Greene, who’s faster, has more range in the field, and hit better in the minors.

Four games is far too small a sample size to make any judgments, but hopefully within the next few weeks either Descalso or Greene can distinguish himself and claim the starting job.

The Cardinals head from one intradivision rival to another, heading to Cincinnati for a three game series starting tomorrow.

The first month of the season is front-loaded with Central Division rivals, as the Cardinals don’t play anyone outside of their division again until May 7, when they head to Arizona. After Cincinnati, the Cardinals come to St. Louis to open up their home schedule against the Cubs Friday. I will be there in the Redbird Club. If you’re there, come find me and buy me a beer.

The first week of baseball provides all sorts of fun oddities.

Currently the Baltimore Orioles are tied for first, while the Yankees and Red Sox are dead last at 0-3.

Through this weekend, 81 players have hit more home runs than Albert Pujols (0).

Detroit’s offense, considered to be one of the best in the majors, has scored 26 runs in three games, including 23 in the last two games against the BoSox.

Picture of the Week 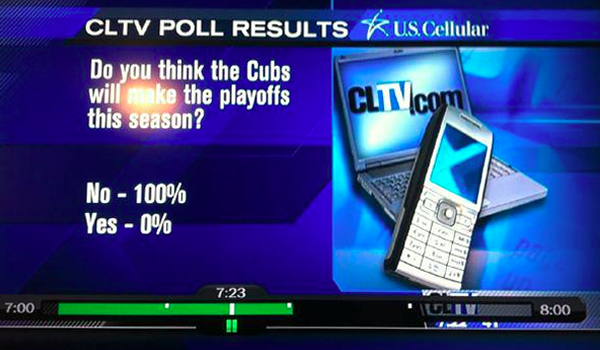