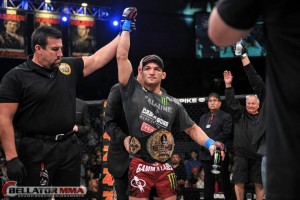 By Juan Ramos
Michael Chandler (12-3) has always embraced competition.
The former Bellator light heavyweight champion began his wrestling career at Northwest High School.
The High Ridge native and former Mizzou All-American said MMA seemed like a more attractive route than wrestling internationally.
“MMA would be a better avenue than wrestling internationally,” Chandler said. “It was a change, so I figured I would try it. I haven’t looked back since.”
Chandler’s MMA career skyrocketed, as he won his first 12 pro MMA bouts.
However, Chandler suffered a split-decision loss to Eddie Alverez in 2013, losing his title.
Chandler dropped a second split decision, to Will Brooks, in a fight for the interim belt.
In November 2014, Chandler lost his rematch to Brooks by TKO.
The 28-year-old is looking to end his skid at Bellator 138, Friday, June 19, at Scottrade Center.
Chandler will face Derek Campos (15-4) in a co-headliner slot, which will air live on Spike TV.
A four-time NCAA qualifier at Mizzou, Chandler’s last wrestling match of his career was in St. Louis during the 2009 NCAA Championships.
Chandler defeated Matt Moley of Bloomsburg in the fifth-place match.
In Chandler’s eyes, his wrestling background gives him a big advantage over his opponents.
“It’s very massive,” he said. “Aside from the physical aspect that I can pick guys up and put them down, I learned a lot from wrestling. The mental aspect of what wrestling has taught me and, more important, what wrestling at a Division I program like Mizzou has really made me the man I am today and the competitor I am today. It’s helped me in so many ways that I can’t even begin to describe.”
The former Mizzou wrestling standout said defeating his opponent will be no easy task.
“He’s a tough guy,” Chandler said. “He’s got good cardio. He’s always in fast-paced fights and so am I. I think I’m better on my feet and on the ground, in the wrestling department. I fully intend to go out there and put on a dominant performance.”
Before his three losses, Chandler was widely viewed as the face of Bellator, but after three losses and a change in leadership with the promotion, some feel he has lost his top spot.
Chandler disagrees.
“I think I’m one or two fights away from getting another title shot,” he said. “When I win that title, I will still be the face of Bellator. It’s great to be part of that. I’m just looking forward to getting this train rolling. It all starts June 19.”
Being a wrestler by trade, it may be easy to assume Chandler prefers taking a fight to the ground, however, he has no preference.
“I have finished fights standing and finished fights on the ground,” he said. “Both are great ways to finish fights, as long as you do it in a dominant fashion. So, I think it’s a tie. Obviously the fans love a knockout more.”
The light-heavyweight division in Bellator features some strong competition from the likes of current champion Brooks, but Chandler still feels he is one of the top dogs.
“I think I’m one of the elite guys,” Chandler said. “It’s not to brag, but I’ve put a lot of dedication into this. I’ve put my heart and soul into this sport. I think I train harder than anybody else and have made sacrifices that other people won’t make. I’m more disciplined than so many other guys. I feel like I deserve to be the best.”
Once again, Chandler pointed to his wrestling background as a tool that has enabled him to be more successful than other fighters.
“I have that drive to constantly improve and get better,” he said. “With that attitude you should have no other choice than to be successful and be elite. That comes from my wrestling background at Mizzou.”
While at Mizzou, Chandler was known for putting on strong performances in front of hometown crowds. While some fighters may get nervous fighting in front of a home crowd or on television, Chandler doesn’t let it affect him.
“I think you got to separate yourself from all that other stuff,” he said. “You have to realize that a fight is still a fight against another man, your same size. The cage door is going to close and you’re going to go into competition-mode to try to win the contest.” 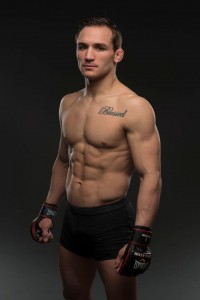