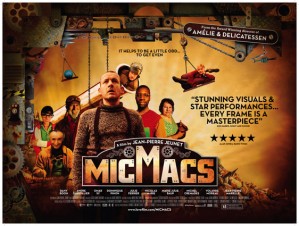 I must admit, I LOVE Amélie. It is one of my favorite films ever. The film has a unique spirit, and it made me like many others fall in love with Audrey Tautou. Director Jean Pierre-Jeunet seems determined to make me stand up and notice him.  I think it is time I learned French, just so I can fully enjoy French cinema, and enjoy the great works the country has to offer. You know a film looks good when it makes you want to take up another language. If you haven’t seen Pierre-Jeunet’s Amélie, The City of Lost Children, or A Very Long Engagement, I highly suggest you put then in your Netflix queue.

First it was a mine that exploded in the middle of the Moroccan desert. Years later, it was a stray bullet that lodged in his brain… Bazil doesn’t have much luck with weapons. The first made him an orphan, the second holds him on the brink of sudden, instant death. Released from the hospital after his accident, Bazil is homeless. Luckily, our inspired and gentle-natured dreamer is quickly taken in by a motley crew of junkyard dealers living in a veritable Ali Baba’s cave. The group’s talents and aspirations are as surprising as they are diverse: Remington, Calculator, Buster, Slammer, Elastic Girl, Tiny Pete and Mama Chow. Then one day, walking by two huge buildings, Bazil recognizes the logos of the weapons manufacturers that caused all of his misfortune. He sets out to take revenge, with the help of his faithful gang of wacky friends. Underdogs battling heartless industrial giants, our gang relive the battle of David and Goliath, with all the imagination and fantasy of Buster Keaton…