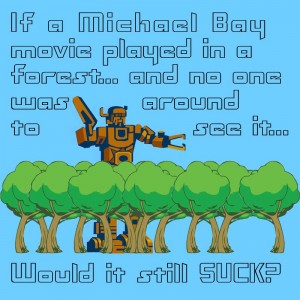 Buy the shirt at IWearCoolShirts.com

Micheal Bay is trying to take over every aspect of your life. That is right, Michael Bay has become self-aware, and only John Connor can save us…

Well, that isn’t entirely true, but he is making the leap in to reality Television, in a new reality show called One Way Out. The show is being described as a mix between Survivor, The Amazing Race, and The Mole.

Bay describes the show as, “Combining unique twists, death-defying challenges, and stunning visuals, we are reinventing the genre, showing just how far people will go when they are stripped of their bare necessities and forced to do whatever it takes to survive.”

Bay and the production company he is working with say the show will, “remain true to the filmmaker’s signature style”. Which I take it means it will lack a cohesive story, good characters, and rely way to heavily on special effects. I’m not sure that is what they were talking about though.

The show is currently being shopped to US networks.

What do you think? Should Michael Bay stick to making movies or is this a project you’d watch? Let us know in the comments.