Me and Orson Welles – HD Trailer 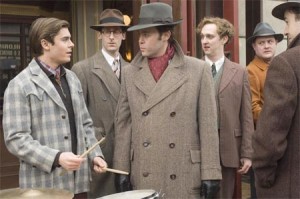 Hmmmm….this project has some people that I really love associated with it. Richard Linklater has really had some disappointing films in the past few years. Although, I’m not totally against Zac Efron, in fact he seems to be willing to make fun of himself on programs like SNL and on sites like FunnyorDie.com. These types of appearances really make like him a bit more. Claire Danes seems to be transforming into Gwenyth Paltrow more every day.  From what I’ve read on the film, the critics who have watched it have had very mixed reactions. I’m interested to see if it is worth a watch, but the trailer really doesn’t make me more hopefully with its self lauded praise.

Set in 1937 New York, the story centers on a high school student (Efron) who happens upon the yet-to-open Mercury Theatre and is noticed by its mercurial founder, Orson Welles. The man lands a part in “Julius Caesar,” the production that catapulted Welles to the top, and spends the next week learning about life and love.