Mayweather vs Pacquiao: The Flop of the Century

There’s a sucker born every minute. 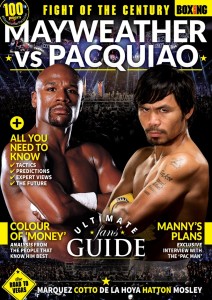 If that phrase is true, you can put me down as one of those suckers, those dumb asses, who watched Floyd Mayweather Jr. dance around the ring, playing paddy cake with Manny Pacquiao. There were 16,507 suckers who actually attended the event in Las Vegas’ MGM Grand Garden Arena. That attendance alone generated a $74 million paid gate. The event that was billed as the Fight of the Century was a catastrophic flop, as far as action goes.

Mayweather looked like he was better suited to be a marathon runner with all the laps he ran around Pacquiao. The Wall Street Journal was on point when it said, it’s good that we have 85 years left to top it. Some people, who threw down $100 to watch the fight on pay per view, have since filed a lawsuit due to Pacquiao’s fighting with a bad shoulder.

Viewers are crying foul, feeling that they should get their money back since Pac Man didn’t make his shoulder injury public knowledge. I may have thought the fight sucked ass, but I’m not asking for my money back and filing a law suit. The only person that is more of a douche than Mayweather, is someone who would sue over the outcome of a fight. Really? I mean come on. How much of a cheap ass do you have to be?

If you go to a St. Louis Cardinals game, will you ask for your money back if they lose? Hell no! The Cardinals would tell you to go screw yourself, just like I am. It seems that we have changed from a nation of hard workers into a bunch of whining pussies! The fight didn’t have enough action so I’m going to stomp my feet, hold my breathe and throw a tantrum until I get my way!!

Don’t even get me started on what a piece of shit Mayweather is. The man has seven counts of domestic violence against him. He is nothing more than a glorified thug. I personally wouldn’t shed a tear if he got hit by a mack 10 truck while crossing the street. And then there is Manny Pacquiao, otherwise known as Pac Man. I’m not a fan of his either. Hey Pac Man, you’re a boxer. No one cares that you are against gay marriage. Shut the hell up! If two dudes or chicks want to get married, so be it. They have the right to be just as miserable as anyone else, right?

Can a boxer really be a super religious freak? He beats the shit out of people for a living. Does he beat someones ass in the name of God? I did find it humorous that Pac Man’s dad ate his pet dog when he was 12. People act shocked when they hear this. Remember though, he lived in the Philippines. A dog is probably a damn fine meal out there. All jokes aside, it’s clear that boxing fans got taken to the cleaners by the Fight of the Century.

We all took it in the poop shoot. I say we just all lick our wounds and move on. That’s what Manny’s pooch would have wanted. If there is a sequel to this lame-ass excuse for a boxing match, we will all get suckered into it again. Hell, I’d get in the ring for 1 percent of what Mayweather made. For 1 percent of $100 million, I’d take an ass whoopin’. But then again, I’d do a lot of crazy shit for a decent payday.

So, next time there is a high-profile fight on, do the world a favor and don’t buy it. Or, you can do what I did, watch it on the Internet for free. Afterall, it’s not breaking the law if you don’t get caught.