Ever since the “Marvel Now” initiative went into effect, The House of Ideas has been taking risk after risk with some of their most popular characters.  They “killed” Peter Parker and replaced him with Otto Octavius, stripped Wolverine of his healing factor, brought the original 1960’s X-Men into the present time, and even did a Battle Royal style book featuring “C” and “D” list characters (Avengers Arena).  Keeping with the recent tradition, Marvel has made some pretty massive announcements over the last week. 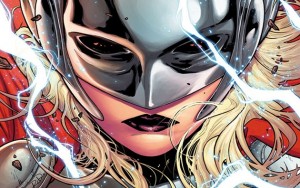 The first of those changes came on ABC’s “The View”.  It was announced that Thor  would become a female in the new book written by long time Thor writer, Jason  Aaron and artist Russell Dauterman.  There’s speculation that this version of Thor  will be revealed to be Thor’s sister or possibly the Angela character (maybe  Angela is Thor’s sister).  The idea that she is Thor’s sister could come to light in  the Original Sin mini series (also written by Jason Aaron).  The only question I  have is how this might affect the Marvel Cinematic Universe.  I’m sure Chris Hemsworth doesn’t have  anything to worry about, but it’s an interesting development.  For those “nerds”  that are calling bullshit, I say this: Jason Aaron is one of comics best writers. He will tell a great story regardless if Thor has balls or not.  Stop worrying. 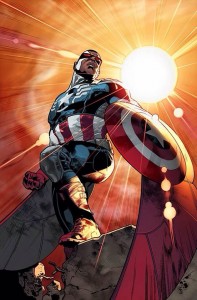 The second character to get a major change is Captain America.  As seen two nights ago on the Colbert Report, Joe Quesada debuted the new Captain America.  It was none other than the former Falcon, Sam Wilson.  This is coming off the most recent development in the Captain America book.  If you’ve been under a rock the last couple of weeks, Sam Wilson slept with Jett Black in the last Captain America issue.  There was a big kerfluffle about the age of Jett Black due to a misinformed article.  Rick Remender (the current writer of Captain America) has stripped Steve Rogers of the Super Soldier Serum.  In doing so, Cap’s body aged to reflect how old he actually is.  Needing a Captain America, it looks like Sam Wilson will pick up the slack. Don’t worry Steve Rogers’ fans, he’s not going anywhere.  Rogers will be guiding Sam Wilson in his future adventures (think Bruce Wayne from Batman Beyond).  The new Captain America series will be written by Rick Remender and will feature art from Stuart Immonen.  Again, I wonder what this will mean for Chris Evans in the MCU (Marvel Cinematic Universe).  Evans signed a 6 picture deal and now he only has two films left. The logical choice is for Bucky Barnes AKA The Winter Soldier (Sebastian Stan) to pick up the mantle, but given the popularity Anthony Mackie received as The Falcon, maybe he gets the nod in future films. 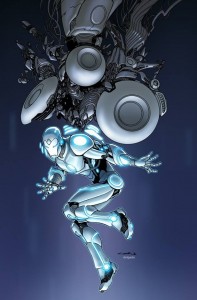 The last big change will not come from a character changing race or sex, but rather his outlook on the world.  In November, Tom Taylor (Injustice & Earth 2) and Yildray Cinar will bring us, The Superior Iron Man. In the book, Tony Stark will relocate to San Francisco. Part of the story line revolves around Stark releasing  a mobile app version of his Extremis technology (created by Warren Ellis that served as the basis of Iron Man 2) that offers users the promise of “beauty, perfection … and possibly immortality.”  Details are scarce, but the idea behind the book is that Tony Stark will “unleash the darkness in himself upon the world”. Sounds pretty ominous.  Where does that leave Iron Man?  Will he become a villain?  Judging by Tom Taylor’s previous work, chances are, yes. The last time someone used the word “Superior” in the title was when Otto Octavius took over Peter Parker’s brain. 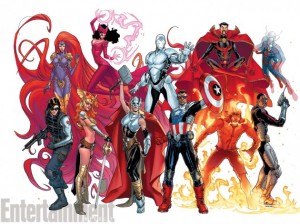 With the the three cornerstones of the Avengers going through some major changes, it would only make sense that The Avengers would get shaken up, as well. Entertainment Weekly debuted this picture of the new Avengers line up.  What I find interesting is how many current and future MCU characters are included.  This goes back to Marvel’s great job at cross-branding.  In the picture, you see Medusa from the Immortals, The Scarlet Witch, Iron Man, Dr. Strange, Ant-Man, The Winter Soldier, Angela, Thor, Captain America, Inferno (also from the Inhumans), and Deathlok.  It is interesting to note that Scarlet Witch, Dr. Strange, and Ant-Man all have Marvel Studio films in the works.  The Inhumans is another property that is in development from Marvel.  When you look at the character design for Deathlok, he resembles the character from the Agents of S.H.I.E.L.D. TV show. 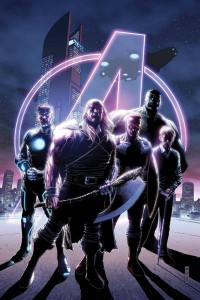 There is another Avengers team set to debut, and this one has some familiar faces but with a different take.  Writer Jonathan Hickman will jump ahead 5 years in the current Avengers book, and while the names on the roster are familiar, some of the characters have a different look. Starting from left to right, we’ve got Havok (Cyclops’s younger brother), a much different looking Thor, the new Captain America, Hulk, and possibly Thor’s old alter ego Johnathan Blake.

Breaking these characters down, Havok has been a part of the Uncanny Avengers (a mixture of X-Men and Avengers), so him being there makes some sense.  Thor is no longer carrying his traditional hammer.  Now it looks like he’s carrying the axe, Jarnbjorn. Also, his arm looks to have been replaced by an arm of the Destroyer robot.  Thor carrying the axe is also out of The Uncanny Avengers.  The Destroyer arm is something that Jason Aaron has hinted at during his run on Thor: God of Thunder. Does that mean that Thor is no longer worthy to wield the mighty Mjolnir? Judging by the new lady Thor, I’d say yes. Then you have The Hulk.  No big changes for the Jade Giant yet.  Finally, you have the man with the cane.  Could that be Johnathan Blake (Thor’s former alter ego) or maybe the old version of Steve Rogers?  Not much has been announced regarding this Avengers line-up, but everyone loves to speculate.

Marvel dropped a lot of big news and massive reveals on fanboys and fangirls this week.  With the San Diego Comic Con only 7 days away, what else could they possibly have in store?  Your guess is as good as mine.