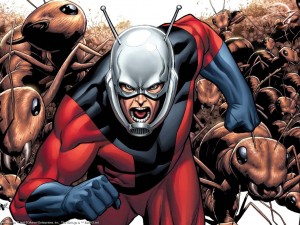 Unless you are a die hard comic book fan, you may not know – or even care – that an Ant-Man film is slated for a 2015 release.

Marvel’s Ant-Man is another creation from the brilliant minds of Stan Lee and Jack Kirby, making his first appearance in Tales to Astonish #35. Dr. Hank Pym discovers a chemical formula that can be used to alter one’s size, and becomes the superhero “Ant-Man.”

Test footage of the upcoming film was shown at Comic Con 2012, but remained unseen on the internet until today. Apparently the teaser test footage was shown on March 19 at the “Best of BUG” show, hosted by Adam Buxton.

Synopsis: Biochemist Dr. Hank Pym uses his latest discovery, a group of subatomic particles, to create a size-altering formula. Though his first self-test goes awry, he develops an instrument that helps him communicate with and control insects.