Marvel has decided to release “All New” titles in their Marvel NOW initiative.  There will be new titles launched as well as existing titles getting “.NOW” numbering (i.e. Avengers #24.NOW).  The titles that are already ongoing will also feature a digital code that will give the reader a bunch of issues from that have already been released.  That way, the reader can catch up for free. 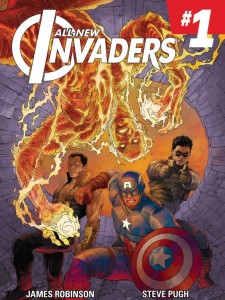 The first of the “All New” titles will be titled All New Invaders. The creative team will be James Robinson  (Starman  & Earth 2) ans Steve Pugh (Hellblazer & Animal Man).  From the looks of the cover image, the book  will feature Captain America, Bucky (Winter Soldier), Namor, and The Human Torch.  One of the interesting things  coming from this book is that the creative team were both working on New 52 titles over at DC.  Robinson was  writing Earth 2 and Pugh was doing the art on Animal Man. With all of the editorial problems going on over at DC,  it’s not wonder these two men jumped ship.

The Invaders were a team of heroes brought together during World War 2.  It seems that Marvel is bringing that  team of heroes back together.  The only question I have is which Human Torch will be a part of the team.  Will it be  Johnny Storm or the original Torch, Jim Hammond?

The next one will be titled Inhuman and will feature the creative team of Matt Fraction (Fantastic Four & Invincible Iron Man) and Joe Madueria (Savage Wolverine & The Avenging Spider-Man)  I can only assume this will feature The Inhumans.

The last announcement so far has been Avengers #24.NOW.  This one looks to be the next story in Jonathan Hickman’s current run on the main Avengers title.  The story will be called Rouge Planet and it will feature the art work of Esad Ribic (Thor: God of Thunder)

Word around the water cooler is that we can expect a Black Widow book, a new Silver Surfer title, and possibly a new X-Factor title.