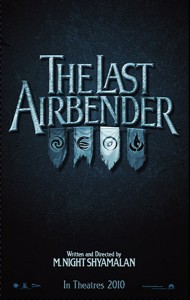 The more I see of this film, the more I like it. Although, I can’t say I’m too sure of them adding 3D. I understand that 3D right now is drawing more audiences than regular films, but it looks so cheesy when done after the fact. (Case in point, Clash of the Titans.) The film looks solid enough in its special effects that poorly done 3D will be a critical deterrent rather than something to praise.

I’m just glad that we can finally see what M. Night Shyamalan is all about without a crazy twist ending. He fell into the hole where every movie he did had to have a gut wrenching twist, and instead of enjoying the film, you are left wondering what the big plot twist is. Movies always work better when you don’t know that a game changing twist is going to occur.

Air, Water, Earth, Fire. Four nations tied by destiny when the Fire Nation launches a brutal war against the others. A century has passed with no hope in sight to change the path of this destruction. Caught between combat and courage, Aang discovers he is the lone Avatar with the power to manipulate all four elements. Aang teams with Katara, a Waterbender, and her brother Sokka to restore balance to their war-torn world.