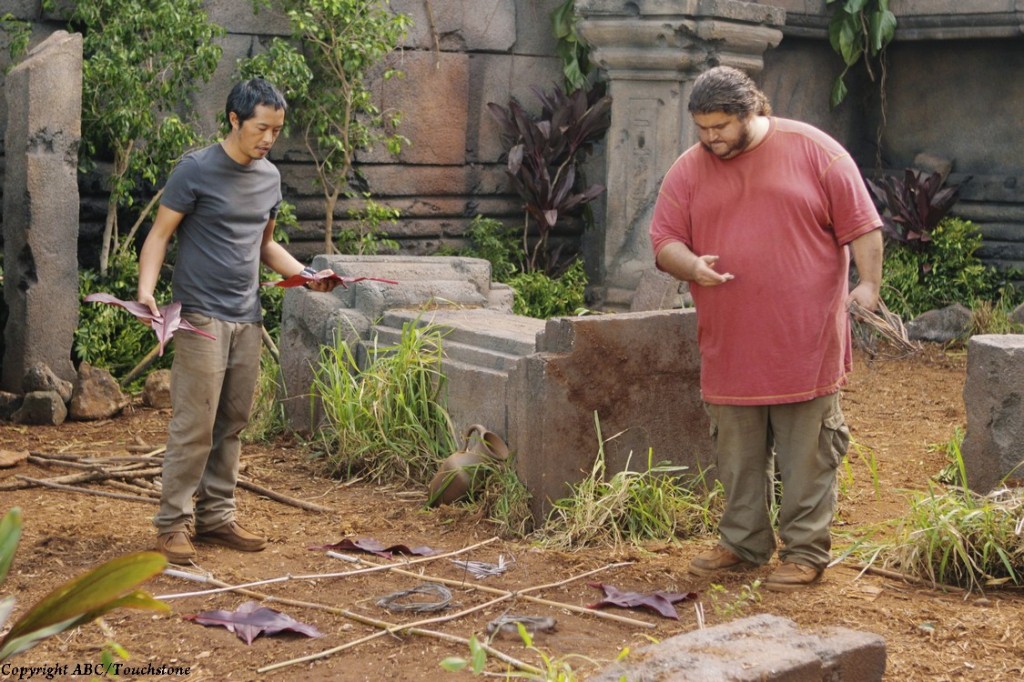 The Lighthouse, episode 5 of the final season of Lost was not up to par with last week but it was another affective sideways story, this time for Jack, and put a lot of pieces in place for next week, and the season, where it looks like things might finally get a little crazy.

First we will take a look at the sideways world, which takes place two days after 815 landed and follows Jack as he picks up his son(!), David, who is a teenager and we quickly find out the two don’t have the greatest relationship and that they rarely see each other as part of the separation.  Now, we don’t ever see whose Jack wife was in this universe since Julie Bowen was nowhere to be found and we will have to wait and see I guess to see if Jack’s romantic life followed a similar path in this universe.  After helping his mom find his fathers will, whose body is still MIA, the two discover the existence of Claire and Jack returns home to find David gone and Jack goes on the hunt to find him at his mother’s house.  Upon playing David’s message machine we discover that he has a recital that night for a music school and that Jack had been looking to reconnect with him since the loss of his own father.  Jack heads to the recital just in time to catch David play wonderfully and bump into an off island, Dogan (our favorite Asian Other), whose son is also performing at the recital.  Jack gets David to admit that he is afraid to fail in his father’s eye and Jack lets him know that he can’t ever fail and that he will always love him, rekindling their estranged relationship.  Some bullets:

-Jack had a weird moment in the beginning where he didn’t seem to remember getting his appendix taken out, noticing the scar in the mirror.  I thought this was going to be our first major clue towards the two worlds connecting, but Jack’s mom said reminded him that he had it taken out as a child, which he didn’t really seem to buy.  If there is more to this, that is to be determined.

-You have to think that not showing David’s mother was intentional, but I remember the producers saying they weren’t able to get one person back to the show they would have liked to, was this Bowen? Will she show up later or did Jack marry someone else different? Again, TBD.

-This was another satisfying sideways story if you ask me and it was nice to see Jack being to avoid the sins of his father and not follow his path like he does in the established universe.

-Dogan showing up continues a streak of a non 815 islanders showing up in every episode so far and I still have no idea if this will end up meaning anything.

Ok, on to the island.  Jack lets Sayid in on that fact that the Others want him dead and that what they think is happening to him, happened to Claire.  Meanwhile, Hurley runs into Jacob’s ghost again and he instructs Hurley with a list of things to do, and that he needs to do it with Jack.  After a bit of convincing, Jack and Hurley head off to an unknown destination through a secret exit of the Temple and run into Kate along the way.  Kate is on the hunt for Claire, maybe heading back to the beach, and shows no interest to join the two of them on their little adventure.  What Kate doesn’t know is that Claire is firmly entrenched in the jungle, mending a rescued from a bear trap Jin and holding Justin, the surviving Other when we last left Jin and Claire, captive and threatening him for the location of Aaron.  Justin tries to convince Jin to untie him so he can kill Claire who claims she isn’t alone, spending time with her “friend” and her father.  Jin chooses to trust Claire though begins to doubt the crazy eyed Claire when she starts threatening Justin’s life if he doesn’t give up the location of Aaron.  Jin, in an attempt to save Justin, tells Claire that Kate “took” Aaron and raised him off the Island which gives her a distressed pause before plunging an axe into Justin’s gut.  Claire steps out to get some air and when she comes back in she asks why Jin would ever say Kate took Aaron?  Jin, who is now terrified of his fellow castaway, takes back what he said about Kate and says he has seen Aaron at the Temple and that the Others have him.  Claire lets us know that this is good news for Kate, as she would kill her if she were to have taken her baby and then FLocke/Man In Black shows up and Claire introduces him as her friend.  Meanwhile, Jack and Hurley continue their trek down sentimental lane and stop by the caves from Season 1 and reintroduce us to the Adam and Eve skeletons.  The two then shoot the shit, Hurley reminiscing how this is just like old times, before reaching their destination, a lighthouse, that Hurley is supposed to use to help guide someone coming to the island per Jacob.  Upon reaching the top, Jack discovers that there are names written on every degree and they line up with the numbers in the cave and are crossed out all the same as well.  As Hurley tries to set the mirror into position, Jack begins to see images in the mirrors as it moves and he forces Hurley to move the mirrors to degree 23 – Shepard.  After it is in place, Jack and Hurley see Jack’s childhood/parents house and beings to push Hurley to ask Jacob why he knows about this, why he is manipulating him.  Hurley is unable to help Jack since Jacob is nowhere to be seen which leads Jack to destroy the mirrors and huff off by himself.  Jacob then shows up again to Hurley, saying this is what Jack needed, and wasn’t to bummed that they didn’t set the lighthouse properly.  He also lets Hurley know that he has also successfully moved them away from the Temple which is no longer safe as a bad man (MIB) is heading that way.  Some bullets:

-The trek up to the lighthouse yielded very few tidbits and seemed a tad too trip down memory lane if you ask me, but at least Hurley was funny and I am sure the things they are alluding to will come back into play

-Hurley was great in all of his scenes, with some great humor, and bouncing off Jacob extremely well.

-Claire is bat shit crazy now and I don’t know what to take from her, Jin was right to be scared, but this story didn’t do a whole lot to move things forward, just more or less set some pieces for the coming battle

-I wonder if Sawyer is going to be outside Claire’s tent with Flocke and I wonder if Jin’s flip flop will hold up after Sawyer and Jin start talking about Kate?

-Now that there are two spots on the Island that have the names and numbers, who’s is whose place? In meaning between the lighthouse and the cave do the MIB and Jacob consider one of them their lairs, do they share them?

-Who is coming to the island? Desmond? Widmore? And is anyone really coming or was that all talk to get Hurley and Jack up there?  Jacob seemed to allude sincerely that someone is coming in the end.

-If the mission to the lighthouse was to be successfully carried out, why 108 degrees?  And does this mean that they started with 360 candidates and are now down to the 5 left in the cave and on the compass?

-Dogan didn’t not seem happy when Hurley pulled the candidate card and I really won’t to know why this made Dogan give up so easily; isn’t he supposed to protect the candidates?

-Also, what do you think is going through Jack’s head looking out onto the ocean?

–51 Austen is not crossed out at the Lighthouse? What does that mean?

And with next week it looks like all of our stories will collide.  Ben, Sun, and company will probably show up to the Temple early in the episode, can’t wait to see Ben and Dogan interact!, followed by Richard Alpert, and then Smokey and company.  Will we get our Jin/Sun reunion?  Will Kate get caught in the mix? And will Hurley and Jack make there way back in time to help/save people or will they be there for only the aftermath.  Until then, happy thinking!