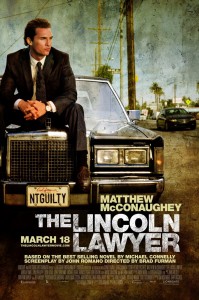 Mickey Haller is a Los Angeles criminal defense attorney who operates out of the back of his Lincoln sedan. Haller has spent most of his career defending garden-variety criminals, until he lands the case of his career: defending Louis Roulet, a Beverly Hills playboy accused of rape and attempted murder. But the seemingly straightforward case suddenly develops into a deadly game of survival for Haller.

In order to enter the contest, “like” ReviewSTL on Facebook and suggest ReviewSTL.com to all your friends (click the “suggest to friends” link on the left side of the page). Then post a comment on the ReviewSTL fan page telling us what your favorite Matthew McConaughey movie is and why. NO PURCHASE NECESSARY. PLEASE REMEMBER TO READ THE RULES!