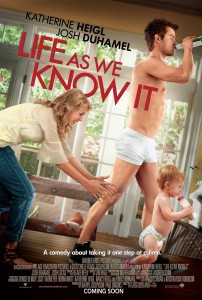 Katherine Heigl and Josh Duhamel star as Holly and Eric in this month’s high-concept romantic-comedy Life as We Know It. The two are bequeathed a child after their mutual best friends unexpectedly die. Unbeknown to Holly and Eric, their friends have named the two of them as the child’s legal guardian in the event of just such a tragedy even though they are not only not dating but have an active (not to mention well known) dislike for each other. When it comes the “comedy bell curve” I don’t know that anything quite brings the funny like an orphaned child.

Holly is a by-the-book business owner; another in an increasingly long line of shrewish characters that Heigl is inexplicably drawn too. And since she has (equally inexplicably) reached a point of being able to Executive Produce her own films, it’s clearly a path of her own choosing. The roles seem to be envisioned as Feminism 2.0 – “women succeeding in a man’s world”. Which is all well and good but she undermines the characters by playing them as utterly humorless. And you know what undermines them even more? Having the answer to their problems be a man.

Now, in her defense, this time out the man in question is played by Josh Duhamel. As leading men go, he’s quite an upgrade from The Ugly Truth’s insufferable Gerard Butler. Duhamel, as Eric, is very much enjoying his bachelorhood when fatherhood is thrust upon him. He and Holly had, years ago, gone on an ill-fated blind date that didn’t even make it out of the driveway; her being an upscale business type didn’t mesh with his laid-back baseball-hat-wearing ways. But now they have to…YIKES…share a house and raise a baby together. Will they learn to be parents? Will they learn to love being parents? Will opposites ever attract? Will valuable lessons be learned along the way? I suppose it’s fitting that a movie about a baby follows such a formula. (That’s an Enfamil joke, by the way.)

To be fair, whether it’s horror, action or yes, even romantic-comedies, genre films need to be judged more on execution than originality. It’s not about the destination, it’s about the journey. With that in mind, Life as We Know It is a fairly innocuous venture. Heigl is Heigl. You’re either on board with her portrayals or you’re not. I’m not. What little there is to like comes courtesy of Duhamel’s casual everyman charm which is becoming something of a pattern. He was the lone bright spot in the dreadful When in Rome and he is here too. Oh, and the cute baby but that’s not really a talent…that’s just being a baby.