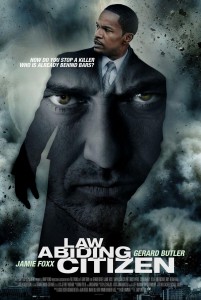 LAW ABIDING CITIZEN stars Gerard Butler (300) and Jamie Fox (The Kingdom) in an intense action / thriller that is sure to keep you guessing from the edge of your seat – beginning to end.

Clyde Shelton (Gerard Butler) is a family man. The movie opens with him and his daughter both spending time together; him tinkering on some kind of circuit board and her making bracelets for her parents. They are waiting to sit down to a family dinner that Clyde’s wife is preparing in the kitchen. Little did he know that all that was about to change with a knock at the door. No sooner than he goes to answer it, he is attacked and rendered helpless at the hand of burglars. They take everything from him that matters most, right in front of his eyes – his family.

Enter hot shot assistant District Attorney Nick Rice (Jamie Foxx). Nick barely ever loses a case, but only plays by his own rules. He likes to make sure that his winning percentage stays solid, so sometimes he has to make hard decisions to do so. After the two men accused of the atrocious crime against Clyde and his family are caught, it is Nick’s job to make sure that Justice is served. But with his conviction record on the line, Nick decides the only way to make the case a “slam dunk” is to make a plea bargain with one of the killers. This decision sends one of the murderers to death row, but the other to prison for only a few years. For Clyde Shelton, a man who has lost everything, this is not justice. Especially when he shows up to the trial, and sees the man who murdered his family shaking Nick’s hand and thanking him for what he has done. That is the moment where you see a switch flip in Clyde’s head, where he decides that if no one else will so something about this – he will.

Both Gerard Butler and Jamie Foxx turn in solid performances in the film. Gerard, while struggling to cover up his Scottish accent, does a decent job in my opinion. Throughout the entire movie, you can feel the heartache and anger coming from his character. And it is hard not to feel sorry for a man who has his family taken from him right before his eyes. The passion that Gerard puts into the role really speaks for his ability to get into a character – especially one that is as intellectual as Clyde. Jamie Foxx also does a great job portraying the emotions of a man who truly believes that he is doing what is right. He has a family as well, and he can only imagine what Clyde is going through after losing his. But in the end, he has a job to do. And that means going after people who break the law. At times when Nick is furious at the vindictive antics of Butler’s character , his emotions seem very real.

Throughout the entire movie, we see the genius of Clyde’s plan to “pull the whole corrupt, diseased temple down” on the heads of those who he feels do not know the meaning of justice. The antagonist of the film is pretty ambiguous throughout, due to the fact that you know what Clyde has been through. Even though the things that he does are not legal, ethical, or moral in any sense – it is hard not to root for him. And the same goes for Jamie Foxx’s character, as you don’t really want him to bring Clyde to justice. This is a 108 minute game of cat and mouse that you don’t want to see end.

Overall, the movie is a lot of fun and is sure to please most of the audience. There will be times when the entire theater bursts into disbelief at the brilliant plans that Clyde pulls off while behind bars. How he does it is just something you will have to find out at the theater. For an intriguing, action-packed thriller, I would highly recommend it.

LAW ABIDING CITIZEN is a B 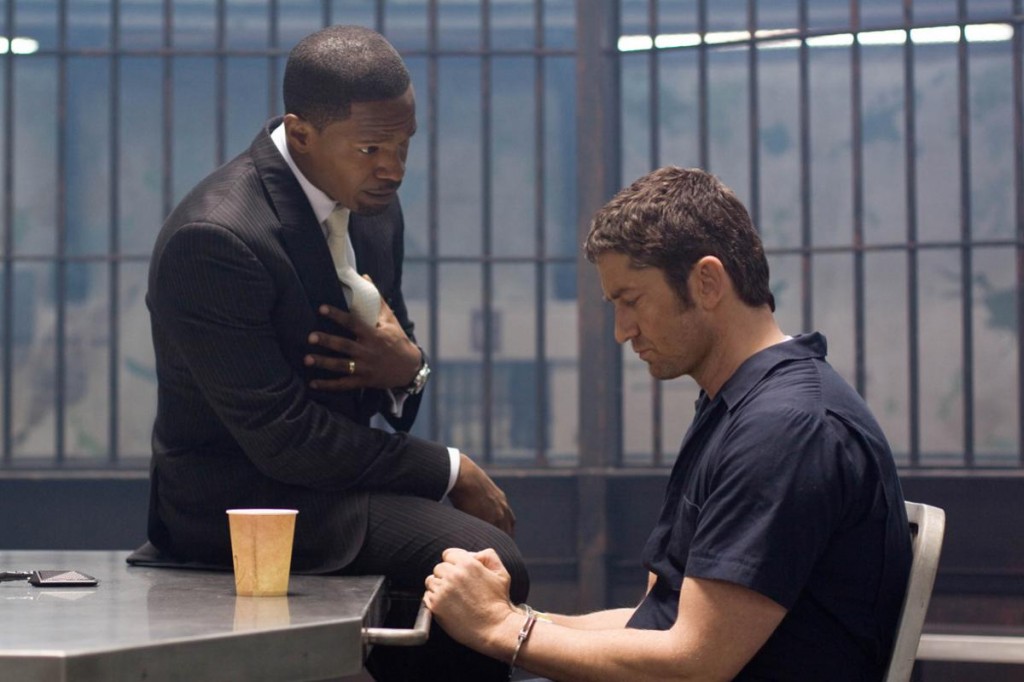