Lady Gaga a Hermaphrodite? Is the Interview Real? 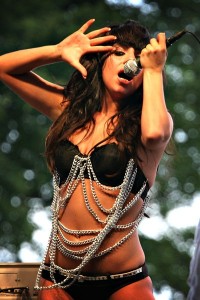 This is the first news that I have heard of Lady Gaga being a hermaphrodite. Apparently everyone has been talking about this and it being a rumor for some time now. Where was I while all of her hit singles were being played ten times and hour and this was being discussed?

Anyway, according to the website bossip.com they had an interview with Lady Gaga herself and she admitted to them that she is a hermaphrodite —

“It’s not something that I’m ashamed of, just isn’t something that I go around telling everyone. Yes. I have both male and female genitalia, but I consider myself a female. It’s just a little bit of a penis and really doesn’t interfere much with my life. The reason I haven’t talked about it is that it’s not a big deal to me. Like come on. It’s not like we all go around talking about our vags. I think this is a great opportunity to make other multiple gendered people feel more comfortable with their bodies. I’m sexy, I’m hot. I have both a poon and a peener. Big f*cking deal.”

Check out this video at around 1 min 10 sec. and see if you can notice anything out of place: