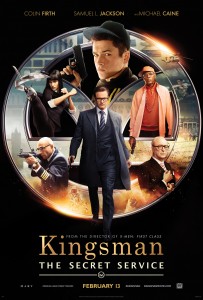 They say whats old is new again, and in the case of Kingsman: The Secret Service directed by Matthew Vaughn, this statement rings true. Spy-related movies in general have taken a turn toward the more serious and purely dramatic route. Not to say that it is a bad thing, but for some,spy movies usually entail a certain level of fun to overlap the obviously dangerous particulars that coincide with the job.

Kingsman leads off with a group of the, well, Kingsman conducting a military operation in the middle east which does not end with necessarily savory results. Fast forward a decade and some change and we find Kingsman agent Harry Hart (Colin Firth), looking to recruit a young adult to join the Kingsman initiative. Here we find Gary “Eggsy” Unwin (Taron Egerton) among the a group of his peers training in the hopes of becoming a field agent. Meanwhile, you have eccentric billionaire, Richmond Valentine (Samuel L. Jackson) unveiling his own plans to “save the planet” in the long run no matter the immediate costly consequences.

One of the great things about Kingsman is the fact that it is self-aware. The movie pays homage to the Bond movies of old with the use of gadgets and exciting presentation. In fact a couple of the characters actually do make reference to the old school bond movies in a very tongue-in-cheek fashion. Another series that briefly came to mind was the first Men in Black (no, there are not any aliens present in the movie) in the sense that this clandestine organization brings about a certain intrigue in how they conduct their operations. At the same time it is amusing to watch the new recruits attempt to acclimate to the stresses of field work in their training. Kingsman does not take itself TOO seriously, there is a healthy balance of comedic beats to offset the stylish action scenes.

Speaking of the action scenes, they in a way remind me of a few previous films before it. For starters, the hand-to-hand is fast, and frenetic much like in Watchmen. Supplementing that is the use of “gun-fu” to a degree seen in the likes of John Wick and to a lesser extent the cult classic Equilibrium. Don’t worry, for those thinking they’ll miss too much of the action, there are plenty of slow-motion shots that give you a vivid viewing of the gore and carnage taking place.

As expected, Samuel L. Jackson most certainly entertains as Richmond Valentine. At this point it has been long known that SLJ has turned the f-bomb into an art form, and if you couple that with the fact that his character has a lisp…. well… its hilarity in it of itself. There are a couple of jokes and scenarios thrown in that may be deemed offensive to some, but, that usually comes with the territory in R-rated films. To be fair, this movie was directed by the same director of Kick-Ass (just in case you did not pick up on the merger I made at the very top  between 00 agent’s and… well you get it).

I cannot recall having seen Colin Firth up front in an action movie, but having seen him in this, I’d be quite alright with him dabbling in this genre more often. As I say this, I may have unwillingly cursed him with Liam Neeson syndrome and the typecasting runs abandon this late in his career…. or not I hope. As for Taron Egerton’s “Eggsy”, he manages to be full of spunk, bravery, wit, and charm. There does not seem to be much history in the case of Egerton’s acting career, but upon viewing this there is a good chance that will change soon.

It seems Mattthew Vaughn has once again crafted a fine adaptation of one of writer Mark Millar’s works which also includes the previously mentioned Kick-Ass. Vaughn had already proven he can make a solid X-Men movie with First Class, and here he has taken a genre that is laden with groan inducing tropes and made it into something consistently entertaining. Movies of this kind can be tied to the pizza analogy. Basically, ‘bad’ pizza is still pizza, which therefore makes it a defaulted good. (however if it’s a bad pizza in the sense of Jupiter Ascending, for the love of God save your money). In this case, Kingsman: The Secret Service is what you would go out of your way to order because it is great. Something so familiar, yet imbued with distinguishable qualities.

Not going to lie, I have been hit with the urge to dress ridiculously nice, and do something outrageous while looking cool doing it.

Kingsman: The Secret Service is an A