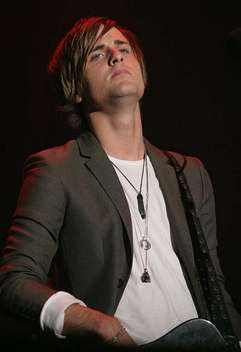 Reenactment of upward facing bass playing that may have gotten Jared into a sticky situation.

Last night, Kings of Leon canceled their St. Louis concert after playing only 3 songs on-stage. This was a disappointment to thousands of their fans, many of whom traveled hundreds of miles to see the band. Their excuse? According to drummer Nathan Followill, brother of the victim, “We had to bail, pigeons shitting in jareds mouth. Too unsanitary to continue.” He tells fans, “Don’t take it out on Jared, it’s the fucking venues fault. You may enjoy being shit on but we don’t. Sorry for all who traveled many miles.”

Here is a press release, written by the PR camp for Kings of Leon. They claim that their is a “pigeon infestation” at Verizon Wireless Amphitheater, that “forced the Kings of Leon to walk offstage after three songs last night.”

Here is their official statement:

An infestation of pigeons living in the rafters of the Verizon Amphitheatre in St. Louis, MO, forced the Kings of Leon to walk offstage after three songs last night. Even though opening bands The Postelles and The Stills came offstage complaining of getting riddled with large amounts of pigeon excrement, the Kings of Leon decided to carry on regardless. The band felt it would be unfair to the fans to cancel the show at that late moment.

“I’m surprised they stayed on for as many songs as they did,” said Vector Management’s Andy Mendelsohn, who reps KoL. “Jared was hit several times during the first two songs. On the third song, when he was hit in the cheek and some of it landed near his mouth, they couldn’t deal any longer. It’s not only disgusting — it’s a toxic health hazard. They really tried to hang in there. We want to apologize to our fans in St. Louis and will come back as soon as we can.”

When the band arrived earlier in the day, the venue warned management that there had been a significant pigeon infestation problem with summer shows over the years, but they were doing all they could to fix it.

“We couldn’t believe what The Postelles and The Stills looked like after their sets,” said bassist Jared Followill. “We didn’t want to cancel the show, so we went for it. We tried to play [but] it was ridiculous.”

Kings of Leon are headed to Chicago tonight to perform at the First Midwest Bank Amphitheatre as scheduled.”

What do you think of the statement released by Kings of Leon’s publicist? Is it legit, or just an excuse? Leave a comment below!