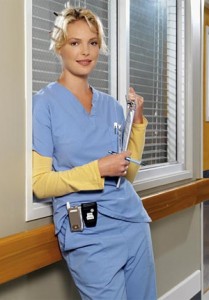 I really like being proved right. I’ve been saying for a couple years now that Katherine Heigl has a typical diva attitude, as exhibited by interviews given over the past few years. Now she does another thing that just adds another point to the column.

Heigl was slated to return to the set of Grey’s Anatomy on March 1st to film her final scenes on the show, and wrap up her character’s arc. It is now March 12th, and she has yet to come to the set of the show, and now creator Shonda Rhimes is ready to move on, and let the both Heigl and her character Izzy go.  Currently the actress is without a publicist, and ABC Studios is declining to comment.

So, let’s take a look at some past history of Heigl’s:

I may be coming off a bit harsh, but I hate the diva attitudes of certain people in Hollywood. Heigl hasn’t even done anything to warrant it. She has been on a hit prime time soap opera and a few romantic comedies. She didn’t invent the wheel or cure cancer. I hate this woe is me stuff she peddles. 17 hour days on a TV set to make millions? Cry me a freaking river.  Do you know how many people work long days with no breaks and make what she does in a minute? Too many.

If she wants to save face with the public, she will own up to her mistakes, and stop being such an imbecile.