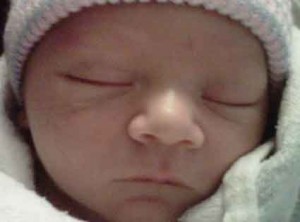 Actor/Comedian Jim Carrey is a grandfather at the young age of 47.  The star announced on his twitter the news that he was becoming a grandfather. The mother of the child is his 22 year old daughter Jane Erin Carrey who he had with first wife Melissa Womer, who he divorced in 1995. Carrey later went on to wed Dumb and Dumber co-star Lauren Holly, although the two divorced within a year.

“Jackson Riley Santana, My Grandson, Born today! This is what 7lbs.11oz. of California dynomite looks like! %^>,” he wrote.

Father of the child is husband Alex Santana, who goes by the stage name of Nitro in the band Blood Money. This is their first child together.

Currently, Carrey is dating former Playboy playmate, Jenny McCarthy. The two have not wed yet, but there have been rumors for a while now that it might be coming along soon.

Congrats to both Carrey and his daughter!