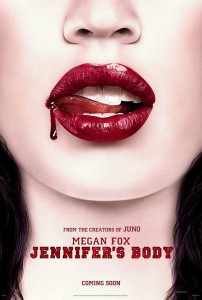 “Jennifer’s Body” is a film that tries to be too clever with it’s pretentious writing, and falls short when the actors can’t deliver the lines. If Megan Fox were to be referred to as an entity, the entire movie could be likened to a commercial for her – similar to Transformers and GM. The film relies too much on the looks of the actress, and less on the writing and characters. If I had a nickel for every time there was a drawn out shot of Megan Fox walking with her hair blowing in the wind… well, I would have well over a dollar.

The story revolves around two childhood best friends – Jennifer (Megan Fox) and Needy (Amanda Seyfried). The two of them are the most unlikely of friends, as Jennifer is a smokin’ hot babe that all of the guys in school want to know, and Needy is the typical nerdy girl with glasses that knows all of the answers in class. But because of their long relationship and childhood bonding, the two are best buds, and so they like to spend most of their time together. Much to the dismay of Needy’s boyfriend Chip (Johnny Simmons), Jennifer want’s to take most of Needy away from their time together one evening and go to a local nightclub. The agenda behind their night out is to check out a band who’s lead singer (Adam Brody) is quite “salty” by Jennifer’s standards. Unbeknown to the two teenyboppers, the night would end up a tragic one – from which Jennifer would never be the same.

Jennifer and Needy are separated after a disastrous evening of much craziness and death, only to be reunited back at Needy’s house much later. Needy knows that something is right, after Jennifer abruptly shows up and starts coughing up some disturbing junk that looks “prickly… like needles.” After this we soon learn that Jennifer has a strange affinity for boys. No, not the normal type of interest that you would expect for Megan Fox’s character would have for adolescent high-schoolers. In this particular case, Jennifer’s Body craves boys in the way that she wants to eat them. This leads the two into a bunch of creepy and awkward situations around the town and school. Needy is on a mission to find out what happened, and to fix her best friend – before she kills everyone they know.

The movie is actually done fairly well. It is shot well, the acting is not terrible. But I cannot get over the script. The movie was written and produced by second-time screenwriter “Diablo Cody,” who wrote “Juno.” I personally enjoyed the movie “Juno.” I thought it was very entertaining, and I think that Ellen Page did a fantastic job pulling off Diablo Cody’s hipster lingo. But this was not the case for Megan Fox and Amanda Seyfried in this film. And it may not entirely be their fault. They can’t help but to read what lines are given to them. But either way, they came off as tongue tied throughout the film, as far as I am concerned. The delivery did not seem natural what-so-ever, and honestly did not fit this type of film. There were a lot of attempts at dark humor in the film, and the most successful were the times when the dialogue was not trying to be hip and clever. I cringed every time I had to listen to Megan Fox deliver a hip line, like when Jennifer told Needy to “moveon.org” over the fact that she was eating people. Yuck.

Overall, the movie was somewhat entertaining if you can get past the over contrived dialogue. If you are a huge fan of Megan Fox, go see this movie. I felt like the amount of time spent filming her doing absolutely nothing but standing there made up a third of the film. It may be a fun night out with some friends, but the movie lacked what it takes to make it something great.

Jennifer’s Body is a C-

Diablo Cody’s second screenplay is full of great ideas and a number of good lines but something keeps Jennifer’s Body from gelling into a well paced and entertaining picture that seems to be hiding in there like the demons inside our title character.

The story follows the school’s hottest girl Jennifer and her best friend Needy whose unlikely friendship is probably based on Jennifer’s insecurities but the two are friends nonetheless.  The two decide to attend a rock concert of a band, Low Shoulder, who are from the “big city” and Jennifer dreams of hooking up with their lead singer.  The band though is a bit odd and is in search of a virgin which they think they should be able to find with ease at this small town gig.  Jennifer lies about her sexual purity to the band and seeing that they have found their virgin an oddly suspicious fire erupts in the bar killing many local patrons and Low Shoulder uses the tragedy to lure Jennifer into their van and off into the night.  Later when Needy gets home, Jennifer shows up in her house looking rather messed up, puking black goop all over the kitchen, and leaving as mysteriously as she arrived.  Jennifer shows up at school the next day seemingly fine and as the school mourns the students and citizens lost in the fire more people end up mysteriously killed and we learn something seriously weird has happened to Jennifer.

I know that was a lot of plot but I felt like laying out the film is important to discuss what Cody tries to do with the genre from here on out.  The film has a lot of fun playing with the idea of grieving in high school, commenting on high school in general, and has some fun with the horror genre in a fairly original way.  The girl vs. girl dynamic is interesting as well and the motives that Jennifer has in who she goes after are intriguing but not explored enough to be interesting.  They make illusions to Jennifer going after people associated with Needy but it really is never clear.  One thing the film does do well is the relationship between Needy and her boyfriend as it feels like a pretty accurate and honest reflection of a high school relationship with the two having some pretty good chemistry as well.  Cody’s script really shines in its commentary on red state America and 9/11 fears in general and while it might seem a bit belated I think it really works. The concept surrounding the connection between the two girls is also an interesting concept that I don’t feel like they executed to enough effect as well.  In fact, the film as a whole feels like it just never follows through as a whole and I don’t know if that is Cody’s script or the director Karyn Kusama’s fault.  The film never finds a flow, drags on numerous occasions, and like I have mentioned fails to clarify itself on a number of occasions.  Now I don’t really think there is a great movie in here, but there certainly is the ground work for a much better one if you ask me.

The actors in the film are actually quite good across the board, with most of the work doled out to the two fore mentioned girls and Chip the boyfriend.  Megan Fox is fun, sexy, and entertaining as Jennifer and her demeanor works wonderfully for the title character Jennifer.  She might not be the brightest character but she isn’t supposed to be and Cody’s dialogue is delivered believably and humorously by Fox.  Needy is also played really well by Amanda Seyfried who nails the awkward girl vibe, but really shines in the early asylum scenes where we discover she is “a kicker”.  I mentioned Seyfried’s chemistry with her boyfriend played by Johnny Simmons and Simmons is both funny and believable in his work and his scenes are some of the films high points.  Adam Brody steals every scene he is in as Low Shoulders lead singer and routinely has the best one liner’s every time he pops up on screen.  J.K. Simmons is also quite funny in his limited work as an odd teacher at the kid’s high school.

In the end, Jennifer’s Body is an interesting attempt at giving the horror genre a fresh face but it never really congeals into anything worthwhile.  I enjoyed the first half hour or so quite a bit, but from there the pacing gets way out of whack and the film is a bit all over the place.  There were quite a few good lines in the film and I was laughing a bit here and there but Kusama can’t put together Cody’s interesting ideas on the genre into a cohesive product and the results leave us a bit confused and restless.  Anyways, there are some things to enjoy in the picture, Fox, Seyfried, and the dialogue first and fore most, it is just a shame it couldn’t have been better as a whole.

Jennifer’s Body is a D 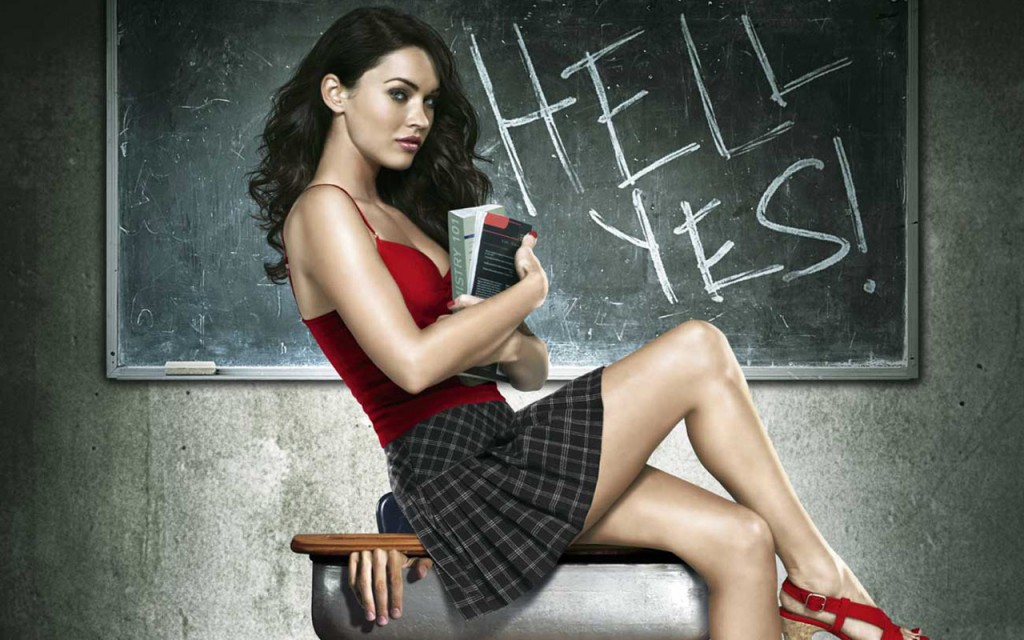