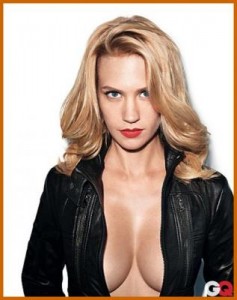 X-Men is my favorite Marvel property.  I grew up on the animated series which was terrific.  The first two films that Bryan Singer directed are great.  Despite almost everyone hating the third outing by Brett Ratner, there are parts that I really like, but it’s mainly due to the fact that I just like the characters.  Wolverine was just awful.  So let’s just forget that film took place.

I am excited for X-Men First Class for a couple of reasons.  But one of the main reasons is the cast.  Part of it is the actors they chose to play the parts, and part of it is the list of mutants that will be featured for the first time on the big screen.

Emma Frost is not new to the screen.  She was featured in a small cameo in Wolverine, but she will play a much larger role in this new film.  The lovely and talented January Jones plays the role in this film.  January is best known for her role on Mad Men.  Jones has recently come out and said this about her character and the costume.

”The costumes are insane. It’s a lot of very body-conscious stuff. If you look at the comic book, she’s barely dressed. She’s got quite the bod, which is very intimidating.”

“I don’t have to do all the crazy prosthetics.  When I morph into my diamond form, it’s all done on computer.”

When asked about doing a film in the same period as Mad Men:

“When I heard that this installment of ‘X-Men’ was gonna take place in the ’60s I was like, ‘Oh my God, you must be kidding me!’ But I read the script and familiarized myself with the character of Emma Frost. She’s so, so far from Betty and from ‘Mad Men,’ and it takes place in that time but it doesn’t feel like a period movie.”

Talking about pleasing the fans of the comics:

“Fans of the X-Men comics have a very set idea of these characters in their heads. I wanted to know as much as I could about her so I wasn’t disappointing anyone. I’m sure I will still disappoint someone.”

Is she having fun filming?

“I’m riding around in helicopters, I’m in a boat one day, I’m in all these fight sequences, we’re all over the English countryside. I feel like I’m a kid playing mutant.”

Is this a film you are excited about?  Let us know in the comments below.